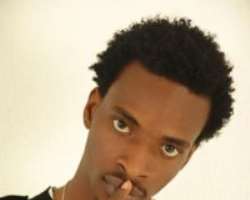 Lyrically talented artiste, Adigun Abolore of Alapomeji Record popularly called 9ice is currently swimming in an intellectual property theft scandal if information at our disposal is anything to go by.

The cool-headed artiste whose second album Gongo Aso shot him to limelight and placed him in the league of multi-millionaire artistes may need an arsenal of legal luminaries to readdress the issue between him and another upcoming artiste simply referred to as Baba Nee.

According to whispers, Baba Nee was sometime with the Alapomeji Records led by 9ice, the youngster, before 9ice came out with his multiple award-wining album Gongo Aso, played an active roll as he made a good account of himself writing some songs in the album.

We were reliably informed that Baba Nee was shocked to the bone marrow when 9ice failed to give him credit in the album. He was said to be so bitter to the extent that he disassociate himself from 9ice due to the alleged greedy act of Abolore whose marriage to Toni Payne has just hit the rocks.

According to Baba Nee, “when I tried to give a complaint about the issue to 9ice and a few of our mutual friends, I was rebuffed and even ignored just because 9ice has become a super star and these were and still are people that sing his praises. I didn't have the financial muscle to fight 9ice and there is no any avenue or label to tell my story, so I was forced to accept defeat. In Tradition, his latest work, I was not only shocked but was bitter for other songs of mine like Petepete which 9ice fraudulently included in the album, all effort to track him down and ask for his reasons for the deliberate use of my lyrics and style without being given adequate royalty or credit proved abortive.”

On the proof of ownership, the young guy said to this reporter that, “though, I have not gone to the appropriate authority to register the songs, however, Kenny Saint Brown will testify to this in 2004 when she organized an event where I sang some of the songs 9ice has now converted to his in his albums. If the video clip of the event is provided, the truth shall reveal itself.” He bitterly explained.

Meanwhile, Baba Nee, according to inside sources, had decided to leave everything in the hand of God as he came out with a promotional track where he raps 9ice down and also talks about the alleged fraudulent saga between him and 9ice only for 9ice to have allegedly instituted an action not to air Baba Nee's song in the electronic media and nightclubs in Lagos and its environ. “With this new development, I can not but put the record straight as I intend to battle in legally and lyrically.” He concluded.