DAILY MOURNING OF LIVING OUTSIDE OUR COMMUNITY 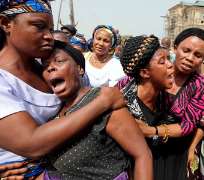 This suicide bombing in Kano Motor Park is one too many. Where are our students, the conscience of every society? Ahmadu Bello University and other premier universities in the Country should have declared the daily mourning until the President is forced into action, not promises. After all, every region wants a real federation. Until Ebele achieve one before leaving Office, he might as well declare his time wasted.

Stop calling for God, prayers and wishful thinking. Heaven only helps those that help themselves. Only Nigerians can help Nigeria, until then, God will not come down. Wars, atrocities, crusades and jihads have been perpetrated on innocent people going about their daily business in disguise by politicians craving for selfish end in the name of some altruist goals. Preach “Only God can help Nigeria” to donkeys.

It does not make a difference whether the suicide bomber at Kano Motor Park was the work of Boko Haram or that of political parties. The consequence is one and the same and whoever becomes their victim has suffered the loss of live or the sadness of losing a loved one. Any type of leader that is ready to cause carnage has no respect for people’s lives and must never be in charge of ruling human beings.

The Ndi-Igbo have seen war, experienced war, lived war, fought war and may be tired of war. This is where the call for peaceful separation is coming from. The only problem with that is, it does not guarantee peace. None of the ethnic group in Nigeria can define a demarcation line from the other. Even if we can, it did not prevent invasion of other’s space in Mali, Sudan or Somalia. However, no one must be subjected to constant threat.

Africans always love to live within Africa communities if they have their choice but circumstances may change and necessitate our venture to greener pasture. The constant ethnic and political killing of Southerners in general and Igbo in particular in the North can only hasten the demise of Nigeria. Yes, we do have intra ethnic riots and sometimes the Northerners have been victims in the South.

The usual caution is to tell people to move out of dangerous areas. If the Northern Nigeria is not safe, leave. If the South is not safe, leave. What most people forget is that parking all you have worked for most of your adult life is not easily transferable or relocated to a new safe environment. Those without jobs have to seek employment. Children have to find new and good school, just as the wife if she is a working mother.

So pack and relocate is easier said than done. Another question is why go back after one or two incidents. One of the Seriki in Lagos gave a good answer. He said they have lived in Lagos all their lives and their children know no other place in the North. Those asking them to come back to the North after a riot cannot even take care of those already there. The same is true for Igbo, Yoruba, Edo or Ibibio in the South going North.

The notion of safety would then be to stay put where you were born for the rest of your life. Most people do, but some of us stretched out even if we have to come back after obtaining our golden flee. The fact that we are at home does not necessarily mean we would be safer. Crime and jealousy play their parts as well, especially in Nigeria and South Africa. If we are not safe at home, how can we be safe outside?

Nigerians are very disappointed when they are thrown out of other African countries. They expect these countries to appreciate what Nigeria has done for their citizens in the past and to pay them back in kind. We forget that Nigeria is the most populated country in Africa and no country has the capacity to allow us to overwhelm them. It means that if civil war breaks out in Nigeria, there is no country that can absorb our refugees.

However, we cannot go through life wondering all the time if we are going to be a victim of crime or jealousy inside or outside our communities. Our innate survival skill for fight or flight will be rendered useless if we constantly have to go into it. Indeed, people become crazy if they are over-loaded. There is a line between generalization and discrimination, once that line is gone, we become mad people.

Those that live in the ghetto of United States cry that they hear gun shots every night and get scared that they may become victims. Africa may be bad but there are no daily gun shots every night. Crime may be high but they can stay out of high crime areas. No matter where you are, circumstances and money dictate your area and peace of mind. However, the same money can make you a target for criminals.

Even more depressing is being in the wrong end of the same street in a European or United States city. A colleague once said if he was caught in a white neighborhood, in most cases, they would beat him up. But if he was caught in a dangerous gang area of his neighborhood, the angry Black or Hispanic youths will kill their own stone cold as in Nigeria. This fear of our brothers and sister create psychological state of anxiety in us.

Most of the people that have ventured out to live outside the comfort of the community where they can trace their names to their compounds, do so from the urge to better themselves and raise a family in peace. It could be for a job, school or to start a business endeavor. The risk could come from your fellow African countrymen, from police in and outside your country or immigration harassment of citizens for looking like illegal.

In South Africa for example, the dividend of the end to Apartheid has not transferred into Promised Land for the natives. There is not enough to go round and none left over for other Africans that have helped in the transformation. The killing of Zimbabwe taxi driver recently, by the Police demonstrated lack of tolerance for their fellow Africans not to mention their high crime rate against one another. The world is watching us.