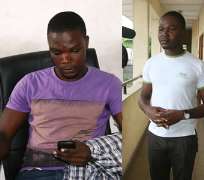 SAN FRANCISCO, March 19, (THEWILL) - The Economic and Financial Crimes Commission, EFCC, on Monday, 18 March, 2013 arraigned Patrick Ezedi Chibueze and Anthony Ugo before Justice Adebisi Akinlade of the Lagos High Court on a 19-count charge bordering on conspiracy to obtain money by false pretence contrary to section 8 and 1(3) of the Advance Fee Fraud and Other Related Offences Act, 2006.

They were alleged to have collected over $25,000 from one Sheila Lynn Griffith, a Canadian, for the purchase of land and facilitation of a joint project.

One of the charges read: "that you Ezeji Patrick Chibueze and Okpara Anthony Ugo sometime in the month of February, 2012 at Ikeja within the Ikeja Judiciary Division with intent to defraud did conspire to obtain the sum of $17,000 (Seventeen Thousand United States Dollars) from one Sheila Lynn Griffith, a Canadian".

Another charge reads: "that you Ezeji Patrick Chibueze on or about April 25. 2012 at Ikeja within the Ikeja Judiciary Division with intent to defraud did obtain the sum of $3,000 (Three Thousand United States Dollars) from Sheila Lynn Griffith, a Canadian Lady when you falsely represented to her that the money was meant for facilitation of joint project between you and Sheila Lynn Griffiths which representation you knew was false" .

When the charge was read to the suspects, they pleaded not guilty.

He argued that, since the second defendant was granted an administrative bail and did not jump the bail, he would make himself available for trial.

Justice Adebisi, in her ruling, turned down the oral application for bail stressing that bail should be formalized in writing. She adjourned the matter till March 16, 2013 for hearing of bail application and ordered that the defendants be remanded in Kirikiri maximum prison.