For men only: The final come down came: The book 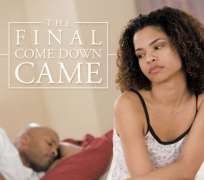 “I don't need this,” I muttered under my breath. I had barely sat down. Hadn't even had time to take the first sip of my coffee when this man planted himself in the chair directly opposite me. It was the last thing

I needed but I looked up at him.

I couldn't place him. He was either working class or no class. Muscular, but not in a symmetrical way. It was easy to tell that his muscles did not come from long hours in a gym. Rather, they most likely came from hard work, the kind you find on construction workers or on butchers. He was as black as a moonless night in a NEPA-infested Lagos. He looked to be on the disgruntled side of thirty.

His face had a sheen to it that could have been caused by sweat or too much Vaseline – or maybe both. His hair was cut so low he appeared almost bald. He had on a white Sean John t-shirt tucked inside of a black Sean John sweat bottoms. His thin, black Sean John hooded jacket was unzipped. Unlaced Timberland on his feet. Two mobile phones nestled inside one rather large hand. His other hand, the right hand, clutched a pink umbrella, and a zirconium stud was tackily stuck to his left ear lobe. He wasn't handsome. If anything you could say that his features were working hard at staying away from full blown ugliness. He smiled. His smile was incredibly bright from immaculately set and sparkling white teeth. That smile was very infectious. So much so that I smiled back at him. He misunderstood that. “I didn't catch your name,” he said.

Quite amazingly, his smile got even wider and brighter. “Oh, ok, my bad. I'm Bruce McLeod.”

His accent and lilt were from somewhere in the Caribbean but I couldn't exactly tell which of the Islands. “How are we today?” he asked.

I picked up my cup of coffee and took a much craved sip. I was sitting quite close to the door of the café. The rich smell of coffee, tea and baked goods jostled very nicely with conversations from people in the café and created a pleasing atmosphere. That ambience had an easing, therapeutic effect on my mood. It was early evening, three days after Obama: Friday November 7th. I was on call. My third night in a row. It had been a little over a couple of hours since I attended to my last patient. Despite immense efforts, the patient – a young man of seventeen who had crashed his mother's car – died. Under the circumstance, that was perhaps just as well. He had suffered extensive brain injury and would have been severely physically and cognitively disabled with minimal arousal for the rest of what would have been a short life. I was worn out, not because of his death, but because of what it wrought on his mother and his older sister. Whilst his sister had been very distraught and cried out dreadfully and had to be physically restrained by some of the nurses, his mother on the other hand sat quietly, dignified, a half smile around her lips as the tears just streamed endlessly down her stoic face.

I am a Neurology Specialist Registrar at a hospital in the capital. The only Black woman in my team. My colleagues and other people flatter me always and insist that I look like Naomi Campbell without the tantrums. Even though I didn't admit it back then, I knew that I was working harder than I should, but I was ambitious and right then I also needed the money. At that time of the day, the staff canteen on the first floor of the hospital only offers tepid coffee from a large and loud vending machine. So it was quite common to see a few of the clinical staff downstairs in the evenings in the café used mostly by the visiting public before it too closes at about 9:00 pm. The beverages there were hotter and tasted better, and you could also get a decent grilled sandwich or cornish pasty. I sometimes went in there whenever I was on late but I always made a point not to take a stethoscope visibly with me in other to blend-in with the visiting crowd and to discourage people from bothering me with endless medical or health inquiries.

That trick clearly didn't quite work too well that evening as Mr bright-shine sitting across the table from me asked, “You work here?”

I stared at him over the rim of my cup of coffee. His eyes reminded me of an expectant guppy. I looked at his pink umbrella. I hadn't realised that it had been raining. But then again, this was London. I took a quick but not too subtle look at the fourth finger of his left hand - the ring finger. It was bare. He saw me looking and perked up even further, his grin as wide as a crocodile's. He scraped his chair along the floor as he pulled it further closer towards me, so close that his left knee touched my right one. He never dropped the intensity or wattage of that smile.

“So you work here?” he asked again through that full-on grin. “Are you a nurse?”

All that while, I had my ID card around my neck but before I came downstairs, I had tucked the plastic rectangular part inside of my blouse and I could feel it resting against my chest.

I pushed my chair back a little, moved my knee away from his and escaped the strong smell of what I assumed was tuna on his breath. I took another sip of my coffee – a long sip this time - and set my cup down. Then there was another smell. A strong perfume. The kind you buy on the street from the man that sells phone cards and batteries. I could smell that perfume a good half minute before its owner entered the café.

The smell took over the entire café as she entered. Almost everyone looked towards the door – everyone except smiling Romeo in front of me. The owner of the strong perfume was a stocky Black sister who looked to be in her mid or late twenties. A fair description of her would be stoutly handsome. Kind of like when a woman is actually prettier than she had made herself look. A self inflicted unattractiveness of sorts. I could have sworn she was not an inch over four foot ten, and was nearly as wide. Looked like she put her makeup on with a trowel. Her hair was cut close then plastered down her scalp. The colour was platinum blonde. Her nails looked like a random selection out of a box of M&Ms. Every finger of her left hand except the thumb was occupied by at least one ring. Also, three fingers of her right hand had four rings. Two rings played tag-team on the fourth finger. Her lipstick was a deep pink. Pink also was the colour of her female Timberland boots, mobile phone and carry-on bag. Her clothes were top of the range designer label – Dolce & Gabbana. It was just that on her, the couture lines didn't quite sit well. It was as if the charcoal grey skirt, jacket, and the pink blouse underneath didn't want to be seen in the same room together. A nose ring completed her outfit.

First, the sister looked towards the order counter of the café, and then she looked sweepingly across the room. Her eyes settled on my table with hyena boy. She froze. Stood there as wooden as Kanayo O. Kanayo on a movie set. Then she took about four quick steps to get to us, hauled off and slapped me hard. So hard that I felt my ID card move about across my chest, but quite remarkably, my glasses managed to stay-on on my face. My face fell downwards and I saw three cups of coffee. In my daze, I reached out my hand and picked the wrong cup and brought air towards my lips. At that, the rotund sister reached back to slap me again…

Disclaimer: "The views/contents expressed in this article are the sole responsibility of Michael Egbejumi-David and do not necessarily reflect those of The Nigerian Voice. The Nigerian Voice will not be responsible or liable for any inaccurate or incorrect statements contained in this article."
Articles by Michael Egbejumi-David
1-2-2010  What Happened To Southern Nigeria?12-10-2009  Yar'adua The Great