Nollywood actress, Diamond Adaeze Igwe caught in a tricycle after lavishing millions of naira on her twin brother’s wedding. 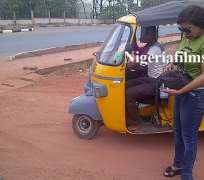 With much prediction, what could be hovering around the minds of fans and Nollywood movie-buffs is if days marked and abound by rain has come on the ways of screen diva and actress, Diamond Adaeze Igwe.

The Nollywood beauty and star actress of Vanity Upon Vanity was within the middle of last month got stepping out of a commercial tricycle, otherwise known as Keke Na Pep, months ago after lavishing millions of naira on her twin brother's wedding.

This mind bothering gist which attached photo of her trying to pay the tricycle driver hasn't stopped raising serious criticism and agitations amongst those in the industry and her fans, as presently they do not know the state of her account.