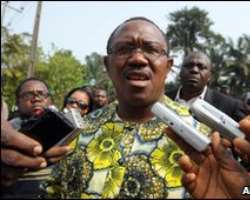 An election for governor of Anambra state in Nigeria's oil-rich Delta region has been condemned amid reports of vote-buying and ballot-box theft.

Peter Obi was re-elected but just 300,000 people cast their ballots from an electorate of 1.8 million.

Gangs of youths intimidated and harassed voters and snatched a ballot box from one polling station.

The chaos has dampened hopes of improvements to Nigeria's voting system ahead of national elections in 2011.

President Umaru Yar'Adua had promised to sort out Nigeria's notoriously corrupt elections after he was elected in a widely-criticised poll in 2007.

But even the winning candidate in Anambra conceded that the vote had been subject to "age-old inadequacies" such as poor preparation.

Mr Obi had initially refused to vote because he discovered he was the only member of his family whose name appeared on the electoral roll. He later changed his mind.

Chukwuma Soludo, who came third in the poll, complained of "brazen manipulation".

"Let me use this opportunity to congratulate my friend Mr Peter Obi," said Mr Soludo.

"In spite of the grave flaws, INEC [Independent National Electoral Commission] has declared you winner of the election."

The BBC's Fidelis Mbah in Anambra says one polling station had 500 registered voters but just three people could find their names on the list.

Many polling stations opened hours late and there were confrontations as voters discovered their names were not on the electoral register.

Mr Obi received almost 98,000 votes - little more than 5% of the total electorate. He is from the All Progressives Grand Alliance, which is in opposition at the federal level.

He beat Chris Ngige, from the opposition Action Congress, who came second with 60,240 ballots and Mr Soludo, of the governing People's Democratic Party, with 59,755.

Officials said they were generally pleased that there had been little violence during the vote.

Vice-President Goodluck Jonathan said it was "an indication that the electoral reforms of the present administration were beginning to have an effect on the nation's political culture".

Those running resource-rich states such as Anambra preside over economies larger than those of some African countries.