New Pope Urges Church To Return To Its Gospel Roots 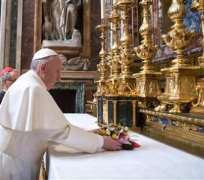 In his first public Mass, Pope Francis urged the Catholic Church on Thursday to stick to its Gospel roots and shun modern temptations, warning that it would become just another charitable group if it forgot its true mission.

In a heartfelt, simple homily, the Argentinian pope laid out a clear moral path for the 1.2-billion-member Church, which is beset by scandals, intrigue and strife.

Addressing cardinals in the frescoed Sistine Chapel the day after his election there, Jorge Bergoglio said the Church should be more focused on the Gospels of Jesus Christ.

"We can walk all we want, we can build many things, but if we don't proclaim Jesus Christ, something is wrong. We would become a compassionate NGO and not a Church which is the bride of Christ," he said, speaking in Italian without notes.

The first non-European pope in 1,300 years, Bergoglio's initial steps suggested he would bring a new style to the papacy, favoring humility and simplicity over pomp, grandeur and ambition among its top officials.

Whereas his predecessor, Pope Benedict, delivered his first homily in Latin, laying out his broad vision for the Church, Francis adopted the tone of parish priest, focusing on faith.

"We may be bishops, priests, cardinals, popes, all of this, but we are not disciples of the Lord," he added.

Earlier, Pope Francis had quietly slipped out of the Vatican to pray for guidance at one of Rome's great basilicas before returning briefly to a Rome hostel, where he had left his bags before entering the secret conclave on Tuesday.

Francis, who has a reputation for frugality and an understated lifestyle, insisted on paying the bill. "He was concerned about giving a good example of what priests and bishops should do," a Vatican spokesman said.

Father Pawel Rytel-Andrianik, who lives in the same residence in the winding backstreets of central Rome, told Reuters: "I don't think he needs to worry about the bill. This house is part of the Church and it's his Church now."

GOOD HEALTH
The new pontiff has postponed for a few days a trip to the papal summer retreat south of Rome, to meet Benedict, who last month became the first pontiff in 600 years to step down, saying that at 85 he was too frail to lead the troubled Church.

Francis is, at 76, older than many other contenders for the papacy and his age was one of several big surprises about the selection of the Argentine cardinal. The Vatican said on Thursday he was "in very good shape" despite having a lung partially removed more than 50 years ago.

Bergoglio is the first Jesuit pope, an order traditionally dedicated to serving the papacy, and the first to take the name Francis in honor of the 12th-century Italian saint from Assisi who spurned wealth to pursue a life of poverty.

No Vatican watchers had expected the conservative Argentinian to get the nod, and some of the background to the surprise vote began trickling out on Thursday.

Ricard added that what Bergoglio said during cardinals' meetings before the conclave also impressed the 114 electors.

Despite never having been tipped for success, Austria Cardinal Christoph Schoenborn said the Argentinian was clearly popular amongst the so-called princes of the Church from the start.

"Cardinal Bergoglio wouldn't have become pope in the fifth ballot, if he had not been a really strong contender for the papacy from the beginning," he said.

Morale among the faithful has been hit by a widespread child sex abuse scandal and in-fighting in the Church government or Curia, which many prelates believe needs radical reform.

Francis is seen as a Church leader with the common touch and communications skills, in sharp contrast with Benedict's aloof intellectual nature.

The new style was immediately on display on Wednesday as he took his first tentative steps as pontiff into the public gaze, addressing cheering crowds gathered in the cobbled esplanade beneath St. Peter's Basilica.

"I ask a favor of you ... pray for me," he urged the crowds, telling them the 114 other cardinal-electors "went almost to the end of the world" to find a new leader.

CHANGE OF DIRECTION
Bergoglio's election answered some fundamental questions about the direction of the Church in the coming years.

After more than a millennium of European leadership, the cardinal-electors looked to Latin America, where 42 percent of the world's Catholics live. The continent is more focused on poverty and the rise of evangelical churches than questions of materialism and sexual abuse, which dominate in the West.

Italian media commentators said on Thursday the power of the Italian voting bloc amongst the cardinals, nearly a quarter of the total, had been undermined by the "Vatileaks" scandal that revealed turmoil and corruption inside the Curia.

This reduced the chances of election of one of the front runners, Milan Archbishop Angelo Scola.

Italian bishops had egg on their faces on Thursday after it was revealed that they sent congratulations to Scola, assuming he had been chosen, just after Bergoglio appeared at the balcony of St. Peter's Basilica following his election.

Bergoglio was born into a family of seven, his father an Italian immigrant railway worker and his mother a housewife. He became a priest at 32, a decade after losing a lung due to respiratory illness and quitting his chemistry studies. He has a reputation as someone willing to challenge powerful interests and has had a sometimes difficult relationship with Argentine President Cristina Fernandez and her late husband and predecessor, Nestor Kirchner.

Displaying his conservative orthodoxy, he has spoken out strongly against gay marriage, denouncing it in 2010 as "an attempt to destroy God's plan," and is expected to pursue the uncompromising moral teachings of Benedict and John Paul II, but with a great concern for the poor and social problems.

According to New York Cardinal Timothy Dolan, Francis raised gales of laughter from fellow cardinals at a relaxed dinner after his election, telling them: "May God forgive you."

At the Basilica of St. Francis in the Italian town of Assisi, the monks were overjoyed at Francis's choice of name. One of them, Father Guillermo Spirito, said he was also from Argentina.

"I have great admiration for his great humility, his simple, everyman manner. The last time I was with him was in 2010 and he told me that St. Francis was a paradigm of how to live the gospel," he told Reuters.

Francis' inaugural Mass will be held on Tuesday.
REUTERS