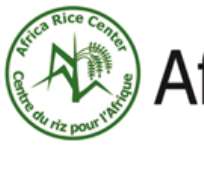 The analysis also showed that average rice yield in SSA jumped by about 30% from 2007 to 2012 and that it is increasing at a faster rate than the global average.

“This is very encouraging news,” said AfricaRice Director General Dr Papa Seck. “The surge in SSA's rice production and yield is a result of key investments made by farmers, governments, the private sector, the research community and donors to develop Africa's rice sector.”

Dr Seck underlined that it is crucial to maintain this trend, because rice consumption continues to increase in SSA at an annual rate of 5%.

High rice prices in late 2007 and 2008 had sparked food riots in several African cities. As a result of this “rice crisis,” African governments, assisted by the international donor community, embarked on ambitious programs to boost their rice production capacity.

To find out the domestic production responses to these measures, AfricaRice analyzed trends in rice production across the African continent, placing particular emphasis on the periods before and after the 2007/2008 rice crisis. All data were retrieved from the United States Department of Agriculture (USDA) (www.fas.usda.gov/psdonline/psdQuery.aspx, accessed 7 February 2013).

“We were pleased to learn that paddy rice production in SSA increased by 2.8 million tonnes from 2000 to 2007, and then accelerated, increasing by 4.7 million tonnes in the period 2007–2012,” said AfricaRice Deputy Director General Dr Marco Wopereis.

He explained that such growth rates are comparable with cereal yield growth rates after the Second World War in the UK and the USA. Rice yield worldwide – driven by the Green Revolution in Asia – increased by 52 kg per ha per year over the period 1960–2010.

“This is evidence of increased use of technological innovation, such as improved varieties and improved crop management in general.”

More information on this analysis is provided in Dr Wopereis' blog piece. A forthcoming AfricaRice publication, to be published by CABI, entitled Realizing Africa's Rice Promisewill present a detailed analysis.

The results of this study will also be discussed at the Third Africa Rice Congress, which is planned to be organized by AfricaRice and the Government of Cameroun in Yaoundé, Cameroun, 21–24 October 2013.