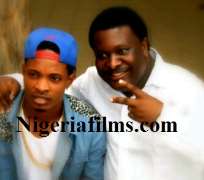 Nollywoodgists.com has authoritatively learnt and gathered that up and coming artiste, Babalola Gbenga Gabriel, better known as Bigiano, and his new record label boss at Goldspan Entertainment Ltd, Sunday Ajasa, are in a messy case with a top artiste management company called Pun Communication Ltd.

We learnt that both may be dragged to the court soon for 'breach of contract' and a N5million suit to be slammed on them.

Recall that Bigiano, after gaining fame with his hit single 'Shayo' some years ago, went into oblivion. Thorough digs done by Nollywoodgists.com revealed that the cause of his then almost 'dead career' was because Bigiano reportedly snubbed all those that helped him to gain fame during the 'Shayo' days.

It was reliably gathered that even T-Joe, a popular Alaba marketer, who reportedly gave Bigiano some amount of money to shoot his then 'Shayo' music video, was also later left out of the deal as Bigiano reportedly went behind him to do the work alone and completely shut T-Joe out.

Our investigation also revealed that most DJs and radio OAPs became 'nonsense' to Bigiano after he gained fame which then made them swear never to help any up and coming acts except they heavily charge for their 'services'.
Back to our story, from documents in our hands, Festus Keyamo's chambers served a notice to Sunday Ajasa for a breach of contract on Pun Communications, a top management outfit based in Lagos.

The said letter dated Monday, January 28, 2013, was written to the MD/CEO of Goldspan Entertainment Ltd, Sunday Ajasa, notifying him of a breach of contract with Pun Communications concerning Bigiano.

Information scooped by us shows that Bigiano had gone to Pun Communications begging that his dwindling career be rescued by the management company.

Pun Communications then told Bigiano that he would sign an agreement with them which he agreed to. He was then told by Pun Communications that a good record label would be sourced for him which must provide him with a good house (flat) on the island, an SUV and other juicy incentives that would befits his status as an A-list artiste, thereby riding on his former success to get such.

A vividly happy Bigiano reportedly agreed to the conditions Pun Communications promised to give any prospective label that will sign him.

During the meetings, Pun Communications explained the conditions to be met before Bigiano can be signed as Goldspan Entertainment Ltd artiste. The record label was also reportedly notified of an existing contract between Bigiano and Pun Communications, which also stipulates Pun Communications would continue as the official management company of the artiste when Bigiano is signed by the label.

Part of the agreement was that the management outfit would get 10 percent on all artiste fees which includes bookings, endorsement etc. A quarterly payment of N300,000 apart from N500,000 sign on fee to Pun Communications, which was agreed to by the parties.

But all of a sudden, as Nollywoodgists.com learnt, Pun Communications was later shut out of happenings when the boss of the management company briefly travelled out of the country.

Goldspan Entertainment allegedly went behind the management company to approach Bigiano to sign an agreement with them shutting out Pun Communications.

Bigiano was later unveiled as Goldspan Entertainment Ltd artiste at a press conference in Ikeja in November 2012.

Pun Communications is now demanding for N5million damages for breach suffered from the deal.

Nollywoodgists.com contacted Sunday Ajasa on the matter, he responded through his label's publicist, Michelle Jonathan.

According to Ajasa, he denied receiving any letter from any law chambers. He further said there is no iota of truth in the allegations.

He claimed that Bigiano was never signed to anybody before he signed for Goldspan Entertainment.

Our digs revealed that both Sunday Ajasa and Bigiano would appear in court in a matter of days from now to face charges bordering on breach of contract.

We will update you as proceedings begin.