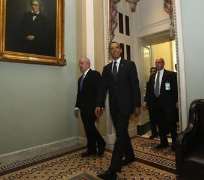 Cyber security threats against the United States are growing, President Barack Obama said before a meeting on Wednesday with corporate leaders about the issue, as concerns rise about hacking attacks emanating from China.

Speaking in a television interview, Obama stopped short of echoing concerns expressed by some lawmakers that the United States was engaged in some kind of electronic war with China.

"You always have to be careful with war analogies ... there's a big difference between them engaging in cyber espionage or cyber attacks and, obviously, a hot war," Obama told ABC News in the interview, which was taped on Tuesday but aired on Wednesday.

"What is absolutely true is that we have seen a steady ramping up of cyber security threats."

Some of the threats are "absolutely" sponsored by governments, he said. "Some are state sponsored. Some are just sponsored by criminals."

"We've made it very clear to China and some other state actors that, you know, we expect them to follow international norms and abide by international rules," Obama said, adding that Washington has already had "some pretty tough talk" with other countries.

Cyber attacks can cost billions of dollars, lead to stolen industry secrets, and place the United States at a competitive disadvantage, he said.

Obama is scheduled to meet with a group of CEOs at the White House later in the day to solicit their input on how the government and private sector together can improve U.S. security for the Internet, online databases and more. The White House has not yet named the CEOs.

The meeting comes just days after U.S. authorities said they were investigating reports that Obama's own family had been hit by hacking.

The president said in the interview that he did not know whether reports were true that hackers had posted financial and personal information online about his wife, Michelle, along with other high-profile Americans.

"It would not shock me if some information ... among people who presumably have pretty good safeguards against it, still gets out," he said.

Obama signed an executive order a month ago directing authorities to improve information sharing on cyber threats. However, such orders do not carry the weight of law and Obama told ABC that Congress has to act.

A Senate bill on cyber security last year failed to secure enough votes to pass, and was opposed by business groups.

"There are ways that we can harden our critical infrastructure, our financial sector," Obama said. "They need to get this done."