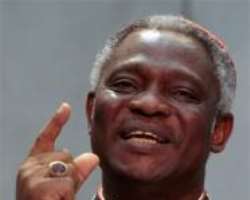 From a humble beginning as a carpenter's son, Peter Cardinal Kodwo Appiah Turkson has risen through the ranks of Catholic Priesthood to assume one of the highest positions at the Vatican amidst his touting by respectable Catholic faithful across the world as the next Pope in waiting.

If that fate meets him on his priestly journey, Cardinal Turkson will become, arguably, the world's most powerful and influential religious leader and that would surely immortalise his memory.

However, looking back to about four decades, Cardinal Turkson would have dictated the writing of a different story if he had followed a childhood passion that nearly lured him out of seminary and priesthood to become a pilot and an officer of the Ghana Airforce.

Indeed, he would have entered the Ghana Airforce the same year with former President Flt Lt Jerry John Rawlings.

With his deep love for Science, Cardinal Turkson nearly abandoned the seminary to pursue a career as a pilot because he could not come to terms with switching to the Arts, since Science was not offered at the Seminary. However, fate resigned him to priesthood on whose wings he is flying from Accra to the Vatican to assume a new assignment as the President of the Pontifical Council for Justice and Peace.

The decision by the carpenter's son to stay at the seminary, rather than pursue a career as a pilot, was one of five defining moments in the life of Cardinal Turkson as a priest.

The first was at a tender age of 13 when he took a firm decision to enrol at a preparatory seminary in Saltpong to begin his priestly career, much against the expectation of family relations, including his parents, Mr Pius Turkson and Madam Agnes Aba Turkson considering his early childhood mischievous and boisterous character.

However, the seminarian training reformed that character and transformed him into a quiet, sober, humble and very respectful person.

After resisting the temptation to abandon the seminary, the third defining moment in the priestly life of Cardinal Turkson came in November 1992, when he was appointed the Archbishop of Cape Coast following the death of Archbishop John Kodwo Amissah. At that time, he was preparing to defend his doctoral thesis, and the new appointment posed a dilemma whether to defend his doctoral thesis or take up the appointment.

Considering the painstaking biblical research he had undertaken, enabling him to learn the use of the Ugaritic, Accadian, Hieroglyphics, Arabic, Aramaic, Hebrew and Greek, all of which were to end abruptly with Episcopal ordination, Cardinal Turkson wished that cup should pass him by. But eventually, he sacrificed the doctorate degree for Episcopal duties.

That interruption notwithstanding, Cardinal Turkson still remains the only active Cardinal to have advanced thus far in formal scripture studies, since three other Cardinals with doctorate degrees are now retired.

The fourth defining moment in the priestly life of Cardinal Turkson came in September 2003, when Pope John Paul II named him as Cardinal, the first Ghanaian Catholic priest to have attained that feat. The elevation was commemorated with a public consistory on October 21, 2003, at St Peter's Square where he received the red biretta and the title of St Liborio. That ritual enabled him to participate in the April 2005 conclave, which elected Pope Benedict XVI into office.

The fifth and, perhaps, the most defining moment of Cardinal Turkson's priestly career is his recent appointment as the President of the Pontifical Council for Justice and Peace, which brings him closer to the high office of Pope.

Cardinal Turkson now has a huge responsibility of promoting justice and peace across the world, a task which the Metropolitan Archbishop of Accra, the Most Rev. Charles Palmer-Buckle, who is a long time friend of Cardinal Turkson dating back to 1968, believes he would measure up to using his gift of deep thinking.

Apart from being a deep thinker, as Most Rev. Palmer-Buckle asserts, Cardinal Turkson's own commitment to justice and peace, which he has amply demonstrated nationally and internationally, provides yet another source of strength to overcome the challenges that his new assignment presents.

In the aftermath of the 2008 general election, for instance, when the nation was on the brink of war, Cardinal Turkson was among a core of religious leaders and civil society members who played a critical role to salvage the country from political turmoil.

Born on October 11, 1948, Cardinal Turkson spent his childhood days at Nsuta Wassa, a small manganese mining town in the Western Region where his father worked as a carpenter. His late parents hailed from Nyanfeku Ekroful, a village near Abora Dunkwa in the Abora-Asebu-Kwamankese District of the Central Region.

At a very tender age in school at the Roman Catholic Primary School at Nsuta, young Turkson's intellectual prowess was established. He could memorise scripts for plays, passages and lengthy poems with so much ease.

He later proceeded to the Urban Council Middle School also at Nsuta where he sat for the Common Entrance Examination in Form Two and after passing, gained admission to Sekondi College.

With a hidden desire to shepherd the flock of God, Cardinal Turkson changed his mind from attending college after reading a poster at Tarkwa inviting young students wanting to be priests to enrol at a preparatory seminary at Saltpond. That was the beginning of his journey to the Vatican.

After a one-year stint at the preparatory seminary at Saltpond, Cardinal Turkson attended the St Teresa's Minor Seminary at Amisano, Elmina, where he obtained the General Certificate of Education (GCE) Ordinary and Advanced Levels from 1962 to 1969.

In 1971, Cardinal Turkson entered the St Peter's Seminary at Pedu to study Philosophy and Theology, after which the late Archbishop Amissah sent him to St Anthony-on-Hudson, a Franciscan Seminary at Rensselaer, New York, where he obtained a combined degree of Masters in Theology and Masters in Divinity.

Cardinal Turkson returned to Ghana after his studies and was ordained on July 20, 1975 at the Francis de Sales Cathedral, Cape Coast, by the late Archbishop Amissah whom he later succeeded.

He later had his Biblical Scholarship at the Pontifical Biblical Institute in Rome (1976-1980) and obtained a Licentiate in Sacred Scripture. He returned to the Institute (1987-1992) for his doctorate degree, but had to abandon it to take up a new appointment as Archbishop of Cape Coast.

Cardinal Turkson has taught in many seminaries and educational institutions, including the St. Peter's Seminary, Pedu, the Major Seminary at Anyama in Abidjan, Cote d'Ivoire, the University of Cape Coast and the Holy Child School In Cape Coast.

As he settles down in Rome to begin his new assignment, it is the silent prayer of Ghanaians, Africans and many well-wishers the world over that he would climb the ultimate throne of glory at the Vatican.