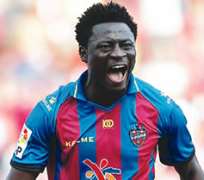 Obafemi Martins
Returnee Nigeria striker, Obafemi Martins, has finally moved to the Major League Soccer. The former Inter Milan player joined Seattle Sounders on Monday after the United States club paid for the buyout clause in his contract with Levante of Spain.

The final stage of the move which began about a month ago was made public by the Spanish side. The report on Levante's official website said that a club in the Major League Soccer in the US., Seattle Sounders, have paid the striker's buyout clause of â‚¬3m.

He tweeted, 'Wow…Finally, I can now announce that I have just signed for Sounders FC…A big step to take in my career. It's a big challenge but I'm ready.

'I look forward to this new era in my career…I also look forward to meet my new teammates and the Sounders FC fans, my new family…I will like to thank Levante UD for giving me a great opportunity to play in one of the best leagues in the world…This is so difficult for me to do, but I really do love my fans…Levante fans are the best…I will always cherish the time I played here…'

Martins who has featured for Newcastle and Rubin Kazan in the past is making his return to the Super Eagles. He has been invited by Stephen Keshi, for the World Cup qualifier against Kenya holding in Calabar on March 23.