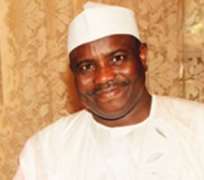 In this piece, John Alechenu writes on the challenges facing the ongoing Constitution amendment process and posits that tough as they appear, they are not insurmountable

The ongoing Constitution amendment being carried out by the National Assembly is, perhaps, undergoing the toughest assault on its credibility.

The forced suspension of the online voting on the local government autonomy question by the Senator Ike Ekweremadu-led Senate Committee on Constitutional Review, and the sudden cancellation of the much-publicised public presentation of collated results of public sessions by the Speaker of the House of Representatives, Aminu Tambuwal, are pointers to this fact.

The Senate Committee cited what it referred to as the introduction of 'alien' issues into the process by unscrupulous Nigerians.

This came barely 48 hours after most members of the Nigerian Governors' Forum announced opposition to the Local Government autonomy clause.

Chairman of the Forum and Governor of Rivers State, Rotimi Amaechi , who spoke on behalf of his colleagues had argued that the local government system could not be considered as a federating unit, therefore, to grant it autonomy would be illegal and an anathema to the Constitution.

'This has been necessitated by the need to preserve the integrity and credibility of the process as there are attempts by some unpatriotic elements to manipulate the ongoing SMS and online opinion poll on key issues in the present constitution amendment project.'

Giving further insights into what transpired, he explained that there was a text message going the rounds, alleging that the Senate was voting on a Bill aimed at carving out large portions of land in certain parts of the country as grazing reserves for Fulani herdsmen.

'The text message therefore invites Nigerians to send 'NO' response to 20052 which is the same short code being used by the committee to poll the opinion of Nigerians on issues in the constitution review.

'The committee condemns this action in its entirety and calls on Nigerians to disregard such as it is a devious propaganda to manoeuvre the outcome of the efforts of the committee to ensure popular participation by Nigerians in the constitution amendment project.

'The short code is entirely dedicated to polling the opinion of Nigerians on constitution amendment issues and has absolutely nothing to do with grazing reserves.

'While the cancellation of this voting on this particular subject of local government autonomy is regrettable, the opinion poll will resume in earnest.'

The situation in the House was even more instructive, as members of the lower chamber had concluded work on the collation of public views and were about to make their findings public when members allegedly discovered that certain portions of the document had been doctored.

It is worthy of note that the portions said to have been tampered with had to do with the thorny issue of state creation.

Recall that the governor of Kano State, Rabiu Kwankwaso, had raised the alarm long before the process began. He had alleged plans by some members of the Committee to use the process to create an additional state for the South East.

Ekweremadu had assured Nigerians that the Committee had no such plan because the process would be transparent and all-encompassing. He and members of the Committee have so far been true to their oath. Public hearings have been held and voting on several key issues which were hitherto agreed upon is still ongoing.

However, the Committee of the House, which is chaired by the Deputy Speaker, Emeka Ihedioha, came under criticisms for allowing what some allege was the doctoring of the document in favour of state creation.

Tambuwal had while cancelling the presentation of the report, apologised to his colleagues before declaring: 'I would like to say that as leaders, we will continue to engage ourselves and in the process of doing that, to ensure that what ought to be done or needs to be done is done very well, especially here in the House of Representatives where this process has been acclaimed to be transparent this far.

'We will not as such want a situation whereby at this stage there should be no issue that has to do with the total collated results of what need to be presented to the public today. As leadership, we have reviewed the process so far and realised that we cannot go ahead with this Programme today. Just like any other thing associated with humans, there are hitches here and there, this is normal.'

Several commentators have advanced reasons why they think there are many more hurdles to cross. The process which is ongoing has also encountered some challenges on account of the late signing into law of the 2013 budget.

For instance, the timetable released by the Senate Committee on the Review of the 1999 Constitution had slated the drafting of the Amendment Bill as well as meetings with the State Houses of Assembly for February, 2013, while the bill is expected to be introduced to the Senate in March.

As things stand, the first two timelines have been missed largely due to the paucity of operational funds while the third is at risk as a direct result of the failure of the first two.

Executive Director of the Civil Societies Legislative and Advocacy Centre, Mallam Auwual Musa, reacting to the situation said, 'The whole world is watching, Nigerians are watching. We will not allow any further waste of public funds with respect to the Constitution amendment process.

'We expect that our lawmakers will live up to their responsibilities of making laws for the good governance of Nigerians.'

Members of the committees in the two chambers of the National Assembly are upbeat about the possibility of passing a reasonable chunk of the proposed amendments by July. It is worthy of note that as tough as these challenges appear, they can be surmounted.