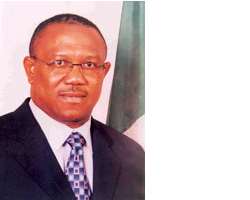 Ahead of February 6, 2010 Anambra gubernatorial election which holds on Saturday might have taken a diabolic and fetish twist as officials of the Independent National Electoral Commission (INEC) in the state capital, Awka, arrived for work on Thursday

morning and found a casket deposited beside the entrance of the commission's gate.Huhuonline.com was hinted that the shocked officials of INEC refused to enter their offices and dramatically watched from a safe/far distance; it took the intervention of the Police who actually removed the casket around 9am before some of the INEC staffs could resume work for the day.


Some of them who could not stand the bizarre and extra ordinary development went back home. Reacting to the ugly incidence, the Resident Electoral Commissioner (REC), Mr. Josiah Uwazuruonye confirmed the story. He said those that dropped it intended to scare the commission's officials: “We are not scared, they are cowards”, he said. The REC said the commission was committed to conducting the election in spite of the incident.

However, taking a check of the preparation for the Saturday poll many of the party candidates had spent the better part of last week putting up what they tagged mega rallies in the major towns. Many of the candidates favoured the commercial city of Onitsha, ostensibly because of its huge concentration of traders. Except the All Nigeria Peoples Party, (ANPP) whose candidate, Mike Ejezie staged his own rally in Awka, the state capital, no other candidate found Awka worthy to host their final rallies. The Basilica of the Most Holy Trinity in Onitsha, owned by the Catholic Church, has been the centre point of these rallies for virtually all the governorship candidates. Only Dr Chris Ngige of the Action Congress (AC) deviated from hosting his rally there as he opted for the spacious All Saints Cathedral, which belongs to the Anglican Church.

Among the leading candidates who have held their mega rallies are the incumbent Governor of the state and candidate of the All Progressives Grand Alliance (APGA), Mr Peter Obi, Dr Chris Ngige of the AC, Prof. Chukwuma Soludo of the Peoples Democratic Party (PDP) and Hon. Uche Ekwunife of the Progressive People's Alliance (PPA). Of the six leading contenders for the position, only Dr Andy Uba of the Labour Party (LP) has not staged a mega rally in either Onitsha or Awka. Huhuonline.com can confirm that Uba has been busy visiting both the Catholic and Anglican Bishops, traditional rulers, traders and Association of Town Unions (ASATU) where he is seeking their mandate with favourable responses from such groups. Aside this strategy, Uba has equally deployed bus drivers, Okada riders to all the rural areas with his posters, fliers. All the LP faithful has moved over to the hinterlands to campaign for Uba, while the idea of a mega rally has been kept in abeyance.

Huhuonline.com checks revealed that the rally hosted by the AC for Ngige in Onitsha, led to total traffic jam as there was no space for even motorcycle operators to convey passengers to their destinations. In attendance were Bola Tinubu, Lagos Governor Babatunde Fashola (SAN), AC National Chairman Bisi Akande, Edo State Governor Adam Oshomole. Also present were the AC's Vice Presidential candidate in 2007, Senator Ben Obi, and Osun State governorship candidate of the party, Rauf Aregbesola.

As things stand now, 48 hours to the overpublized poll, the popular agitations on the lips of the candidates and the teeming electorates in the state is that free and fair poll should be allowed. Over to the umpire, INEC; whether the will and wishes of the people will triumph this time around; as we all know the political experience has been an albatross to Nigeria's democratic system.