NDOMA-EGBA: AN EXEMPLARY LEADER AT 57 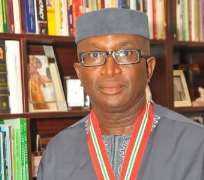 In the words of Theodore Roosevelt (October 27, 1858 – January 6, 1919), the great author, hunter, naturalist and explorer, who was the 26th American President between 1901 and 1909, “the most successful politician is he who says what the people are thinking most often in the loudest voice”. According to John Calvin Maxwell, an evangelical Christian author, speaker, and pastor, born in 1947 and has over 60 books in his kitty written by him, principally focusing on leadership, “A leader is one who knows the way, goes the way, and shows the way”.

For Marian Anderson (February 27, 1897 – April 8, 1993), one of the most celebrated African-American singers in the twentieth century, “Leadership should be born out of the understanding of the needs of those who would be affected by it”. Napoleon Bonaparte (August 15, 1769 – May 5, 1821), a French military and political leader, who rose to prominence during the later stages of the French Revolution and its related wars in Europe, noted that “A leader is a dealer in hope”.

Senate Leader, Senator Victor Ndoma-Egba, an astute politician, seasoned legal expert clocked 57 years on March 8, 2013. Representing Cross River Central Senatorial District, the three-term Senator can simply be said to be one of the most exceptionally outstanding and experienced lawmakers in the country today.

Believed to have lived up to expectation in the discharge of his legislative duties and responsibilities, the lawyer turned politician have, no doubt, endeared himself into the hearts of many Nigerians, particularly the people of his constituency. This, perhaps, is the reason why his constituents have deemed it fit to continue to give him their mandate to represent them since 2003, when he first contested for the senatorial seat in the current democratic dispensation.

From being the Senate Spokesman to Deputy Majority Leader and now Majority Leader, Ndoma-egba has carried on with such agility, vim and charisma that seemed to have made him become a strong legislative marque of sort and valuable reference point not just on parliamentary matters, but also in the political front. He has, as a political figure, exhibited great sterling leadership qualities as adumbrated in the aforementioned leadership quotes, to an extent that one can not in any way be out of kilter to describe him as an exemplary leader. He is truly an exemplary leader!

Asked what are the things he would say he is most grateful to God for at 57, Ndoma-Egba said: “I am thankful to God for the gift of good health. At 57 i don’t have any health issues. I am still able to play my lawn tennis regularly and until recently I still have both parents, which is a rare gift for somebody of my age. And then, at 57 one is able to look back with gratitude to God that one has a story to tell about his life. I have a son that has been called to the bar. At 57, I have reached the highest point of the legal practice, my chosen career. Senior Advocate of Nigeria (SAN) is the pinnacle in the law profession. In public office, I have also made my mark. So, I am most grateful to God that at 57 there is nothing more for me to achieve other than to continue to render service to humanity.”

Audu Umar Aminu, an indigene of Kogi State from Okene is the protocol officer of the Senate Leader. Aminu, who has been with Ndoma-Egba since 2008 has this to say about his boss: “He is such an easily accessible, approachable and open-minded person. He is not tribalistic. He takes everybody as one. Despite his simplicity and jovial nature, however, he is a no-nonsense man when it comes to assignments and delivery on deadlines. Beneath his jovial and lighthearted disposition is a kind of seriousness that you dare not take for granted. He does not tolerate any form of indolence at work. I will say that he is one man who believes very strongly that punctuality is indeed the soul of business and so he frowns seriously at tardiness. He is invariably very passionate about the plight of his people and enjoys solving all problems. There is no how difficult a problem may be that he would not find a way around solving it for you if you present it to him. The welfare of members of his constituency remains his primary duty, even as he continues to make significant impact in the advancement of the legislative arm of government and promotion of good governance in Nigeria.”

As a political reporter, I have been privileged to have one on one media chat with Senator Ndoma-Egba on several occasions. A quite affable, amiable and genial parliamentarian as rightly noted by Aminu, one of his aides, the Senate Leader, unlike most politicians who would always shy away from newsmen, is constantly ever ready to respond to any issue of national importance in the media. At every interaction with him, you will definitely have something new to learn about him that is inspirational.

Seen by political observers as a rare breed and patriotic silent achiever, Ndoma-egba’s annual scholarship award scheme, which has been running for years has put smile on the faces many indigent Nigerians particularly those from his constituency. The scholarship designed principally for undergraduate and postgraduate students from the Cross River Central Senatorial District is one of his manifold philanthropic gestures towards his people and sundry schemes he introduced to enhance their standard of living.

Commenting on the history and evolution of the scheme, which already has almost 600 beneficiaries, he explained: “People have the impression that the scholarship started when I became a senator, but the scheme started back in 1980. I came back from youth corps in 1979 and in 1980 I was made the first old boys chairman of a secondary school I passed through. I did not have need for the allowances I was being paid which was plenty of money in those days and when I discussed with the principal, we agreed that the money could be used to pay the school fees of some indigent students and that was how the scholarship scheme started with an accumulation of my allowances. And as time went on I started to supplement it and it became a full-fledged scholarship scheme. So, it did not start when I became a senator, even though that was when it became much more elaborate.”

Born on March 8, 1956 in Ikom, Cross River State into the family of late Emmanuel Takon Ndoma-Egba, a retired judge of the Court of Appeal, the Cross River Central Senator obtained an LL.B degree from the University of Lagos (UNILAG) and LL.M from the University of Calabar (UNICAL). He was called to Bar in 1978 and elevated to the rank of SAN in 2004 while already in the Senate. He was Chairman of the Nigerian Bar Association (NBA), Calabar Branch, and President of the Calabar Chamber of Commerce. Appointed a Commissioner at the age of 27, Ndoma-Egba, a former Director of the Cross River Basin and Rural Development Authority, was last year conferred with the national honours award of Commander of the Order of the Niger (CON), after having had the Order of the Federal Republic (OFR).