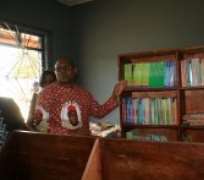 What promised to be a mild drama was abruptly aborted when, at Ogidi Boys High School, yesterday, in the course of Governor Peter Obi's routine visit to schools, the Catholic Archbishop of Onitsha, Most Reverend Valerian Okeke looked Obi in the face and said to him: 'You do not know what you're doing.' When everybody was ready to receive the bombshell the Archbishop explained: 'Mr Governor, I said you do not know what you're doing because all the sacrifices you are making today, the efforts to revitalize institutions of state, to build roads, hospitals, schools, industries and so on, you do not know the impact they will have on the society in ten years time. You are really God's wonderful gift to Anambra State.'

The Archbishop lamented what he called four wasted decades in Anambra State consequent upon the forceful takeover of mission schools which the State turned into a den for training armed robbers and all manner of vile characters that made the State rather than continue in the tradition of excellence, to embarrassingly become an exporter of criminals to other parts of the country.

The Archbishop said he was happy that Obi's seven years as Governor had been devoted to reversing this trend. He insisted that today, even those in the opposition had continued to concede that he has done better than any other Governor since Anambra State was created. He expressed the wish for Obi's successor to be like him by saying: 'odi ka gi ako na anyi' ( may the State never lack someone like you).

Addressing students of the schools visited along with the Governor, Most Reverend Valerian Okeke said by trying to make life easier for them, the Governor was directing them to see excellence as their only mantra.

In his own remarks, Governor Obi who visited ten schools and mission hospitals yesterday including, Mater Amabilis, Umuoji; Our Lady Secondary School, Nnobi; St Joseph Special Science School & Seminary, Awka Etiti, Girls' Secondary School, Umudioka, and Boys Secondary School Ogidi; and presented cheques worth 50 million Naira to Archbishop Valerian Okeke said the money brought the State's 2012 support to the schools to a close. The Governor however assured that the support for 2013 will commence in this quarter. He lamented what he called the destruction of school system through the takeover of mission schools and once more apologized for what he described as grave error by the government.

Governor Obi said the return of schools to the missions and the assistance given to them should not be seen as something extraordinary but as a sort of reparation to the society for the wrong government inflicted on it. The Governor who at Ogidi High School was presented with the cup the school won in the Under 17 football competition, noted with happiness the return of school sports in the State in line with the old and valid belief that sound body should be in sound spirit ( mens sana in corpore sano).

He said that the provision of money to schools for equipping their libraries, equipping games facilities and other extra curricular activities in addition to building of hostels, refectories and classroom blocks would continue in line with the belief of his government that education is the number one legacy to bequeath younger generations for competition tomorrow.