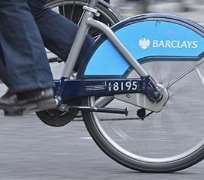 Barclays (BARC.L) paid 428 bankers more than 1 million pounds ($1.5 million) in 2012, a torrid year for the British bank after its fine for rigging Libor interest rates.

The number of staff paid over 1 million pounds was down from 473 in 2011, according to new disclosures in its annual report released on Friday.

The pay included salary, bonus and the value of long-term share awards.

Chief Executive Antony Jenkins was paid 2.6 million pounds, including 1.8 million for his time as CEO from August 30. He said last month he would forgo his bonus after the bank's tough year, when it was fined $450 million for rigging Libor interest rates, prompting former CEO Bob Diamond and its chairman to quit.

Jenkins had previously been the head of retail and business banking.

The bank revealed the pay bands for all its 145,000 staff, following through on a promise by new chairman David Walker to provide greater transparency on pay.

The new management team has pledged to address cultural problems at Barclays after criticism it was too aggressive and took too much risk in the past, but has admitted rebuilding the bank and its reputation could take 5-10 years. ($1 = 0.6645 British pounds)