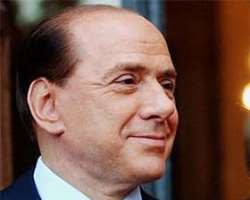 Italy's prime minister on Wednesday called for empathy for all victims, whether from the Nazi Holocaust or Israel's war in Gaza, drawing a link that threatened to tarnish a visit that has cemented his already warm ties with Israel.

Silvio Berlusconi's comments, while avoiding direct comparisons to the Holocaust, nonetheless could touch a raw nerve in Israel — a country that was founded in the wake of the Nazi massacre of 6 million Jews and that is home to more than 200,000 Holocaust survivors.

Berlusconi has been warmly welcomed throughout this three-day visit to Israel, and he has repeatedly spoken of his strong affinity for the Jewish state and expressed sorrow over the Holocaust.

But during a last-minute meeting with Palestinian President Mahmoud Abbas in the West Bank, the Italian leader acknowledged the Gaza offensive, which killed some 1,400 people, including an estimated 900 civilians, had caused great pain to the Palestinians.