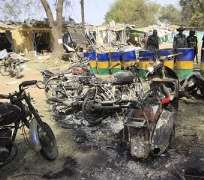 The gunmen who were said to have stormed the town at about 9:30pm, headed straight for the police station, where they overran the station as many of the policemen on duty were caught unawares and had to run for their lives.

A Police Inspector was however killed along with seven other civilians in the sporadic shooting by the hoodlums.

Both the Borno State Police Commissioner, Abdullahi Yuguda, and the Police Public Relations Officer in the state, Jibrin Gideon, could not be reached to confirm the attack as their mobile telephone lines kept ringing without being picked .

But speaking with journalists in Maiduguri on condition of anonymity, a top security official confirmed the incident, saying it was however brought under control immediately by the police who repelled the rampaging hoodlums by chasing them into the bush.

A resident of Gwoza, who also craved anonymity, lamented that that was not the first time the gunmen would attack the police station.

He said during the last attack, the gunmen went as far as attacking one of the Bridge Banks in Gworza and carted away huge amount of money belonging to the bank.

They were also said to have detonated bombs which affected the Local Government secretariat in the town.