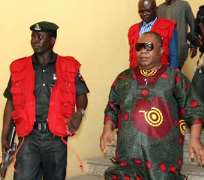 He pleaded not guilty to the charges.
Bello, 49, was arrested recently by operatives of the State Security Services, SSS, at the Sheraton Hotels and Towers, Lagos, for allegedly impersonating the Director of Operations of the EFCC, Mr. Olaolu Adegbite. He was at the hotel premises to further an advance fee fraud scheme targeted at Mrs Mercy Orji, wife of the Abia State Governor, Mr. Theodore Orji. He reportedly posed as the EFCC’s Director of Operations with a fake identity card bearing the name of E. Adegbite. Reports from the SSS indicated that Bello was arrested on January 27, 2013 while negotiating with some aides of his would-be victim. He was later handed over to the EFCC for prosecution.

At the EFCC’s office, the politician-turned conman said that he was working with one Nelson Ndukwe and Chuks Offor, both aides of Mrs. Orji to perfect his nefarious agenda of swindling her. He confessed that he impersonated the EFCC’s Director of Operations. “I’m sorry that I impersonated the Operations Director of the EFCC. I did it to be able to arrest Mrs. Orji’s assistants who are said to be working for her to launder money. It was my first time of doing this. EFCC should help me out of this”, he said.

In his ruling, Justice Onigbanjo granted the defendant bail in the sum of N500, 000 (Five Hundred Thousand Naira only) and two sureties in like sum. One of the sureties must be a grade level 12 officer in the civil service and must have a landed property in Lagos. The two sureties must be resident in Lagos state.