At Least 15 Killed On Kenya Coast On Election Day 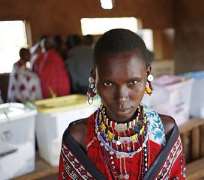 At least 15 people were killed in attacks by machete-wielding gangs on Monday as Kenyans lined up to vote in a presidential election they hope will rebuild the nation's image after a disputed 2007 poll unleashed weeks of tribal bloodshed.

Just hours before the start of voting and with long lines across the east African country, at least nine security officers in Kenya's restive coastal region were hacked to death, and six attackers were also killed, regional police chief Aggrey Adoli said. The total toll had earlier been put at 17.

There were two separate attacks which senior police officers blamed on a separatist movement - which, if confirmed, would suggest different motives to those that caused the post-2007 vote ethnic killings and could limit their impact.

Officials and candidates have made impassioned appeals to avoid a repeat of the tribal rampages that erupted five years ago when disputes over the poll result fuelled clashes between tribal loyalists of rival candidates.

More than 1,200 people were killed, shattering Kenya's reputation as one of Africa's most stable democracies and bringing its economy to a standstill.

As in 2007, the race has come down to a high-stakes duel between two candidates, this time between Deputy Prime Minister Uhuru Kenyatta and Prime Minister Raila Odinga, the loser in 2007 to outgoing President Mwai Kibaki. Both contenders will depend heavily on votes from tribal loyalists.

The United States and Western donors are worried about the stability of a nation that is an ally in the fight against militant Islam in the region but are also fretting what to do if the victor is Kenyatta, who faces charges by the International Criminal Court of orchestrating violence five years ago.

Provisional results could emerge hours after polls close at 5 p.m. (9.00 a.m. ET), although the election commission has seven days to announce the official outcome. Polls suggest the election could go to a run-off, provisionally set for April.

"If elected, we will be able to discharge our duties," said Kenyatta's running mate, William Ruto who also faces charges of crimes against humanity. "We shall cooperate with the court with a final intention of clearing our names."

KENYANS WARY
One of the attacks on Monday took place outside Mombasa and another in Kilifi about 50 km (80 miles) to the north. Senior police officers blamed them on a separatist movement, the Mombasa Republican Council (MRC), which wanted the national vote scrapped and a referendum on secession instead.

At the Kilifi site, Reuters footage showed a piece of paper on the ground with the words: "MRC. Coast is not Kenya. We don't want elections. We want our own country." But there was no formal claim and no independent confirmation of the assailants.

Even before the violence, many Kenyans were wary, notably in flashpoints last time. Some shopkeepers ran down stocks and some people in mixed tribal areas returned to their homelands.

"Some of us have been here as early as 2 a.m. this morning. I got here slightly after 3 a.m.," he said. "There have been a lot of awareness campaigns against violence and I don't think it will happen this time around, whatever the outcome."

Kenya's neighbors are watching nervously, after their economies felt the shockwaves when violence five years ago shut down trade routes running through east Africa's biggest economy. Some landlocked states have stockpiled fuel and other materials.

A grenade attack on a police post in Garissa, a city near Somalia, killed two civilians, inspector general of police, David Kimaiyo, told reporters. He also said a bomb exploded in the Mandera area, also near the border, causing no fatalities.

He did not say who was behind the incidents and voters were undeterred. In the early hours before voting, some Kenyans blew whistles and trumpet-like "vuvuzelas" to wake up voters. But others remain fearful that broader violence could flare.

"PASSIONATE PLEA"
"Our future is uncertain but we long for peace and victory is on our side this time round," said Odinga supporter 32-year-old Eunice Auma in Kisumu, where violence flared after 2007.

"However, should our candidate (Odinga) fail to clinch victory. I'm afraid violence will erupt," she said.

Kibaki, barred from seeking a third five-year term, made what he described as a "passionate plea" for a peaceful vote. All the candidates have vowed to accept the result.

Although the two leaders are well ahead of the other six contenders, polls suggest they will struggle to secure an outright win, which could make for a tense run-off. A narrow first-round victory for either could spark legal challenges.

To try to prevent a repeat of the contested outcome that sparked the violence after the December 2007 vote, a new, broadly respected election commission is using more technology to prevent fraud, speed up counting and increase transparency.

Some voters still grumbled about the slow process as lines snaked hundreds of meters (yards) from the polling station. "People are beginning to fall and faint on the queue," said Peter Gichuchi, waiting for hours in the steamy heat of Mombasa.

To build confidence, Kenya has passed a new constitution since 2007, police chiefs have deployed extra forces to maintain security and there is a more independent judiciary which commands greater respect. Officials have appealed to candidates to raise any challenges in the courts and not on the streets.

Even so, Odinga, 68, has raised a warning flag, telling Reuters two days before the vote that the commission had by "design or omission" failed to register all voters in his strongholds, a charge the commission denies.

On Monday, he condemned the Mombasa violence.
Alongside the presidential race, there are hotly contested elections for senators, county governors, members of parliament, women representatives in county assemblies and civic leaders.