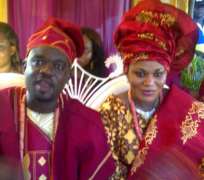 Top Nollywood comic actor, Charles Inojie, has welcomed the arrival of a baby girl into his family.

The actor's wife, Obehi, reportedly put to bed on Thursday, February 28, 2013. She is presently in good condition with the child, a source told us.

The actor's number was not reachable as at press time when Nollywoodgists.com put a call through to him to confirm this story.

However, a source in the AGN confirmed the story to us.

Charles lost out the post of AGN's General Secretary to Yakubu Abubakar in 2012 which produced Ibinabo Fiberesima as the president.