Tonto Dike and Her Music Misadventure 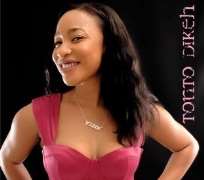 The time was 2a.m of March 2, 2013. I was surfing the internet, checking out news sites and blogs to keep aboobs abreast of latest happening. Then I stumbled on a page which had an upload of her new song, JEJE. Out of curiosity, I clicked on the link which I kinda regret that now. But thank goodness I didn't download, that would have turned out to be a waste of my precious megabytes bearing in mind that with our Telecomms coys are not smiling.

After the three minute + twenty seconds of play, 'OMG! Why naa!' were the words that came out of my mouth. Jeez it sounded like a China phone ring tone.

On October 18, 2012, I published a critique of her debut singles, Itz Ova and Hi. For those that missed it, I recommend you please read here (http://dailypost.com.ng/2012/10/18/her-music-career-dead-arrival-a-critique-tonto-dikehs-new-singles/)

Admittedly, not every lady has the greatly impressive voice of Omawunmi or the poetic prowess of Asa, but every lady can dare to achieve a better voice quality by working on the vocal folds. Such determination will no doubt bring out the best in whoever it is.

Rihanna and Estelle are not so vocally sound, but they identify their limit; they know when to scream go on high pitch. The thing is producing a high intricate array of sound is not beans. You keep training till you earn it; ask Tiwa Savage, Chidinma, Yemi Alade and co.

Genevieve Nnaji released one track, flopped and quickly beat a retreat. That is someone who realized early that she may eventually make a mockery of herself as against accolades and heavy paychecks.

Omotola on her part is still wallowing on mediocrity. I never came across (or know of anyone who has seen) her album(s); one isn't sure sef if it's one or two. Talk of a nose diving musical career confusing even the supposed fans. Recently, we saw a picture of her and Bobby Valentino in a foreign studio; na by that? Well, she should do and release whatever wuru-wuru they made and let's wait to locate it on Billboard Top Chart. *chuckles*

Now to the analysis proper, I shall rate the JEJE according to four parameters listed below. Each has a maximum score of 2.5 points, thus the total points is 10.

Voice Texture/Harmony: This sadly has yet improved. Ever since the noise about her latest recording, I thought she was ready to blow our minds. Like I said in my previous article, several award-winning artistes that have attained the pinnacle have vocal trainers/coaches so it baffles me our very own has refused engage one. (Score: 0.5)

Lyrical Content: Still poor as usual. That it is meant for the clubs that doesn't mean you should disregard the use of cute lines. At one point, I heard the spiritual 'yaga yaga hiyan hiyan' Terry Gzus style. Hey, it works for him, so why copy. Not done, she added R-Kelly's 'Move your body like a snake Ma'…Ha! (Score: 1)

Sound Quality/Production: Shout out to them brothers, but effort by Jospo and Indomix' mastery failed to do the job. Production aside, usually when you hear a new song once or twice, it is possible to recall the bridge or chorus. In this case, that wouldn't happen. (Score: 1)

Audience Connection: Reading through comments on blogs and Twitter, I stand to be corrected that the reaction is worse when compared to her last outing. Majority of the listeners obviously didn't feel it (Score: 0.5)

Altogether, my personal rating is 2 points. That means one star over five, same as last year verdict. No improvement!

You know I have this feeling that Miss POKO tripped for the balderdash D'banj said in his interview with Toolz. “I will sign Tonto and she will blow”…Lwkmd! Blow go where, she be bomb? He just shouldn't take his luck too far. On a second thought, let him go ahead and help her arrange a duet with G.O.O.D Music's Big Sean and Pulsha T. By then, he would have succeeding in falling his hand.

We love our actresses; we appreciate their acting skills. However, our admiration in no way blinks the green light for them to go on and display their not-well-thought out ideas or by-force talents.

To my dear Tonto, albeit your songs inspire me to write, it sure doesn't inspire me to make me want to press play again. Acting is perfect for you and if you're thinking of adding to that, may I suggest that you venture into a thing that has won your more fans; a Make-Up Line. It is unique and trust me, you'll sell. Everyone has caught the 'Clothing Label' bug so that'll be really cool. Stella Damascus has raised the bar with the launch of her Adiva Hair Brand.

In all sense of sincerity, this TD's Singing Vocoder Things no be am at all.