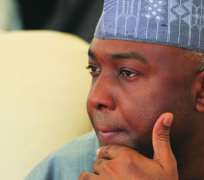 Asadu, was shot dead, Saturday night, near his home at Amorji Nike, in Enugu East Local Government Area at about 10 pm. His police orderly and driver who were with him at the time of the incident sustained serious bullet wounds and are said to be lying critically at the National Orthopaedic Hospital, Enugu.

Asadu, who was on a private visit to his home in Enugu at the weekend, was said to be driving into his private residence when the assailants who were suspected to have laid an ambush around his residence attacked him and his aides about 100 metres away from his house. Asadu, according to sources, had a visitor whom he saw off along with his driver and a police orderly posted to guard his residence from Abakpa Police Division, leaving behind the official escort team that came with him from Kwara State Police Command.

They were said to be returning to the house after dropping the visitor when they suddenly noticed a bus trailing them behind as they branched into his street only for the gunmen to start firing at the vehicle from the rear.

The gunmen were said to have shot sporadically killing Asadu and wounding the two policemen but before they escaped, they reportedly took away the rifle of the orderly whose body was riddled with bullets.

In a condolence message he signed and sent to the family of the police commissioner and the Inspector General of Police, Saraki said: “It is with heavy heart that I received the tragic news of the assassination of Kwara State Commissioner of Police, Mr. Chinwike Asadu, who was murdered on the 2nd of March 2013 in his hometown in Enugu State alongside his police orderly and driver, who received various degrees of gunshot wounds.

“I am deeply saddened by this turn of event. The wanton spate of crime and killings in our society of recent is horrendous and wicked. It is absolutely shocking and a big loss to Nigeria and the Nigerian Police Force to lose a gallant officer under such circumstance. I urge the Nigerian Police to ensure that the perpetrators of this dastardly act are being fished out and made to face the law accordingly.

“Mr. Asadu was a diligent officer who handled the security apparels of Kwara State with esteem professionalism. His exceptional portfolio in the Nigerian Police Force is noteworthy, which earned him his last appointment. He will be remembered for his numerous strides at maintaining a safe Kwara State by making it crime free and peaceful, most especially the role he played during the recent ErinIle- Offa communal crisis.

“ I sympathise with the family of the deceased and the Inspector General of Police. My thoughts and prayers are with them on this sad development. I pray Allah grants them the fortitude to bear this irreplaceable loss.”