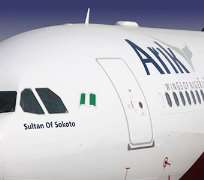 SAN FRANCISCO, March 03, (THEWILL) – A grounded aircraft belonging to Arik Air is reportedly hindering flight operations at the Ibadan Airport. The aircraft which had been grounded because of its burst tyres is said to be blocking the tarmac thus preventing other aircraft from landing at the airport.

Impeccable source at the airport said the aircraft was about to leave for Abuja with the passengers which included editors returning to Abuja after their convention in Ibadan and other people with appointments in Abuja when the tyres got burst.

The passengers were forced to disembark and return home as all outward flights were put on hold for another 24 hours to enable the aircraft fix the burst tyres.