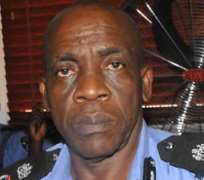 The Kwara State Commissioner of Police (CP); Mr Chinwe Asadu, has been killed by unknown gunmen in Enugu state.

The Police boss was killed Saturday night at gunpoint in his car at Amorji Nike, near the densely populated Abakpa Nike area in Enugu East local government area within the state capital.

The Orderly of the Commissioner and driver escaped the attack but they sustained gunshot wounds and they are reported to be in a critical state at the National Orthopaedic Hospital, Enugu.

Reports from the state has it that, Mr Asadu who was on a visit to Enugu-his state of origin- had a visitor and he decided to escort the guest in his own vehicle with only his driver and Orderly coming along with him.

While the trio were returning to the Commissioner’s residence, they reportedly noticed a bus trailing their vehicle and as they veered into the street, the gunmen who must have laid an ambush for the Commissioner a few metres away from his private residence, started firing at the vehicle from the rear.

It was during the sporadic shooting that the Mr Asadu was killed on the spot while the Police Orderly posted to guard the CP’s residence from Abakpa Police Division, sustained bullet wound all over his body and his rifle taken away before the gunmen escaped.

The official escort team that came with the Commissioner from Kwara State Police Command that were left behind in his compound, got wind of the attack but not until the gunmen had routed their escape.

They quickly rushed the Commissioner and his aides who were in a pool of blood to the Orthopaedic Hospital but it was at the hospital that Police boss was confirmed dead.

He reportedly gave up the ghost before arriving at the hospital.

His aides who were badly wounded were immediately admitted but they gather that they are in a critical state.

The State Police Public Relations Officer has confirmed the incident, adding that “a serious manhunt has started to track down the gunmen behind CP Asadu’s killing.”

National Malaise Of Insecurity
Meanwhile, the Kwara State Governor, Dr Abdulfatah Ahmed has described the murder of Mr Asadu as shocking and unfortunate.

A statement issued by the state government noted that “it is particularly painful that late CP Asadu has become another index in the annals of the growing national insecurity, adding that it has become very expedient for Nigerians to rally round in finding enduring solution to the national malaise of insecurity.”

The statement described the death of Mr. Asadu as a huge lose not only to the Nigeria Police but the Kwara State security apparatus in particular as he exhibited high sense of discipline and professionalism in the course of duty in the State.

”Late CP Chinwe Asadu , in the discharge of his duty in Kwara state contributed immensely to the sustenance of peace in the state and in the upholding of our values as a state of harmony” the statement read.

The Governor, who described Late CP Asadu as a quintessential police officer, prayed to God to grant the family, the rank and file of the Police in the state and the Nigeria Police, the fortitude to bear the loss.