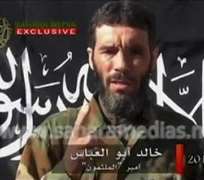 Chadian soldiers in Mali have killed Mokhtar Belmokhtar, the al Qaeda commander who masterminded a bloody hostage-taking at an Algerian gas plant in January, Chad's military said on Saturday.

The death of one of the world's most wanted jihadists would be a major blow to al Qaeda in the region and to Islamist rebels already forced to flee towns they had seized in northern Mali by an offensive by French and African troops.

On Friday, Chad's president, Idriss Deby, said his soldiers had killed another al Qaeda commander, Adelhamid Abou Zeid, among 40 militants who died in an operation in the same area as Saturday's assault - Mali's Adrar des Ifoghas mountains near the Algerian border.

France - which has used jet strikes against the militants' mountain hideouts - has declined to confirm the killing of either Abou Zeid or Belmokhtar.

In Washington, an Obama administration said the White House could not confirm the killing of Belmokhtar.

Analysts said the death of two of al Qaeda's most feared commanders in the Sahara desert would mark a significant blow to Mali's Islamist rebellion.

"Both men have extensive knowledge of northern Mali and parts of the broader Sahel and deep social and other connections in northern Mali, and the death of both in such a short amount of time will likely have an impact on militant operations," said Andrew Lebovich, a Dakar-based analyst who follows al Qaeda in the Islamic Maghreb (AQIM).

Anne Giudicelli, managing director of security consultancy Terrorisc, said the al Qaeda commanders' deaths - if confirmed - would temporarily disrupt the Islamist rebel network but would also raise concern over the fate of seven French hostages believed to be held by Islamists in northern Mali.

Chad is one of several African nations that have contributed forces to a French-led military intervention in Mali aimed at ridding its vast northern desert of Islamist rebels who seized the area nearly a year ago following a coup in the capital.

Western and African countries are worried that al Qaeda could use the zone to launch international attacks and strengthen ties with African Islamist groups like al Shabaab in Somalia and Boko Haram in Nigeria.

'MARLBORO MAN'
Belmokhtar, 40, who lost an eye while fighting in Afghanistan in the 1990s, claimed responsibility for the seizure of dozens of foreign hostages at the In Amenas gas plant in Algeria in January in which more than 60 people were killed.

That attack put Algeria back on the map of global jihad, 20 years after its civil war, a bloody Islamist struggle for power. It also burnished Belmokhtar's jihadi credentials by showing that al Qaeda remained a potent threat to Western interests despite U.S. forces killing Osama bin Laden in Pakistan in 2011.

Before In Amenas, some intelligence experts had assumed Algerian-born Belmokhtar had drifted away from jihad in favor of kidnapping and smuggling weapons and cigarettes in the Sahara where he earned the nickname "Marlboro Man".

In a rare interview with a Mauritanian news service in late 2011, Belmokhtar paid homage to bin Laden and his successor, Ayman al-Zawahri. He cited al Qaeda's traditional global preoccupations, including Iraq, Afghanistan and the fate of the Palestinians, and stressed the need to "attack Western and Jewish economic and military interests".

He shared command of field operations for AQIM - al Qaeda's North African franchise - with Abou Zeid, although there was talk the two did not get along and were competing for power.

A former smuggler turned jihadi, Algerian-born Abou Zeid imposed a violent form of sharia, Islamic law, in the ancient desert town of Timbuktu, including amputations and the destruction of ancient Sufi shrines.

Robert Fowler, a former Canadian diplomat held hostage by Belmokhtar from 2008 to 2009, told Reuters, "While I cannot consider reports of the death of both Abou Zeid and Mokhtar Belmokhtar as anything but good news ... I must temper my enthusiasm by the fact that this is by no means the first time Belmokhtar's death has been reported."

President Francois Hollande said on Friday that the assault to retake Mali's vast desert north from AQIM and other Islamist rebels that began on January 11 was in its final stage and so could not confirm Abou Zeid's death.

A U.S. official and a Western diplomat said, however, the reports about Abou Zeid's death appeared to be credible.

U.S. Representative Ed Royce, Republican chairman of the House Foreign Affairs Committee, said the killing of Belmokhtar "would be a hard blow to the collection of jihadists operating across the region that are targeting American diplomats and energy workers."

Washington has said it believes Islamists operating in Mali were involved in the killing of the U.S. ambassador in Libya's eastern city of Benghazi in September.

After its success in dislodging al Qaeda fighters from northern Mali's towns, France and its African allies have faced a mounting wave of suicide bombings and guerrilla-style raids by Islamists in northern Malian towns.

U.N. Secretary-General Ban Ki-moon said on Friday that a U.N. peacekeeping force to replace French troops in Mali should be discussed as soon as possible.

Chad was among the quickest to respond to Mali's appeals for help alongside the French, rushing in hundreds of troops experienced in desert warfare, led by Deby's son, General Mahamat Deby.

The country's president may be hoping to polish his regional and international credentials by assisting in this war, while bolstering his own position in power in Chad, which has been threatened in the past by eastern neighbor Sudan.