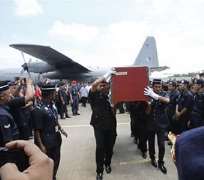 Gunmen have killed five policemen in Malaysia's Sabah state where members of an armed faction from the Philippines have been facing off with security forces as they stake an ancient claim to the remote corner of Borneo island.

The killing of the five policemen late on Saturday, in an ambush on police hunting followers of the sultan, will reinforce fears that insecurity is spreading in a region rich in resources that has been of increasing interest to investors.

Malaysia's inspector general of police, Ismail Omar, tried to ease any worries on Sunday, saying the situation was under control.

"I don't want speculation that Sabah is in crisis," Ismail told a news conference in the town of Lahad Datu. "We have our security forces at three places to respond."

The confrontation had threatened to reignite tension between the Philippines and Malaysia. Ties have been periodically frayed by security and migration problems along their sea border.

Economic interests are also at risk.
Oil majors like ConocoPhillips and Shell have poured in large sums to develop oil and gas fields in Sabah. Chinese companies have been investing in hydro-power and coal mining.

Much of Borneo's forest has been cleared, to the horror of indigenous people and environmentalists, and replanted with palm oil. Tens of thousands of migrants have come to Sabah from the Philippines to clear the timber and work the plantations.

For generations Borneo, one of the worlds' biggest islands, was a forbidding expanse of jungle, thinly populated by head-hunting tribesmen, and claimed by Muslim sultans and later European colonialists based in coastal trading towns.

"DRASTIC ACTION"
Colonial Britain and the Netherlands carved up the island in the nineteenth century and Malaysia and Indonesia took their shares upon independence. Britain agreed to independence for the tiny oil-rich sultanate of Brunei on Borneo's west coast.

A British trading company agreed during colonial times to pay Sulu a nominal lease for Sabah - it now amounts to 5,300 ringgit ($1,700) a year - and the claim of the ancient Sulu sultanate on Sabah was all but forgotten, until February.

Then, about 150 followers of the Sulu sultanate, which has no power but commands respect in the southern Philippines, sailed in and occupied a Sabah village, staking their claim and demanding a renegotiation of Sabah's lease.

Malaysia has said the demands will not be met and has sent in the security forces. Both Malaysia and the Philippines have called on the gunmen to give up and go home.

An increasingly exasperated Malaysian prime minister, Najib Razak, who faces an election in weeks, has promised "drastic action" if the group does not leave.

The trouble looks to be at least partly the result of efforts to forge peace in the southern Philippines, in particular a peace deal signed between the Philippine government and Muslim rebels last October to end a 40 year conflict.

The sultan loyalists had gone to Malaysia to revive their claim to Sabah as a protest in response to what they saw as the unfair peace deal, he said.

A senior Malaysian defense official said the gunmen in Sabah had links with a Philippine rebel faction leader called Nor Misuari, who also saw no benefit from the pace deal.

"He will surely stir up more trouble," said the Malaysian official, who declined to be identified.