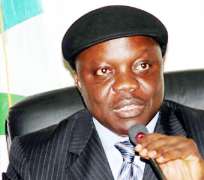 SAN FRANCISCO, March 02, (THEWILL) – Governor Emmanuel Uduaghan of Delta State has described the death of Mr. John Abba Ogbodo, an Assistant Political Editor with The Guardian who died on Thursday while traveling along with three other journalists on official assignment from Abuja to Awka in Anambra State, as a cruel shock and annoying twist of fate.

In a statement issued on his behalf by Mr. Felix Ofou, his Press Secretary, Friday, Uduaghan said, “It is a cruel shock and annoying twist of fate. He died. His colleagues survived. The nation is left to mourn. We can only take solace in the belief that God knows best."

According to Uduaghan, it will take a long time for journalists and politicians to overcome the shock of Ogbodo’s death, saying the late journalist will be greatly missed for the candour, resilience and uncommon sense of duty that he attached to his job while alive.

The Delta State governor recalled that Ogbodo, while covering activities of the ruling Peoples Democratiic Party (PDP) as well as other political events, was always fair, incise and balanced, a fact which, according to him, endeared him to all and sundry, culminating in the outpouring of grief by all manner of persons with the news of the death.

Uduaghan therefore called on all Nigerians to take solace in the wisdom that God knows why the late journalist had to bow out at a time when his bosses had acknowledged his proficiency. He also expressed condolence with the management and staff of The Guardian, the NUJ, particularly Abuja chapter, and the late Ogbodo's family over the loss.

The governor prayed God to grant the nation and those affected by the tragedy the fortitude to bear the loss as well as repose for the soul of the deceased.

The late Ogbodo died in a fatal auto crash on his way to Awka to cover the convocation ceremony of the Nnamdi Azikiwe University, where the Deputy Senate President, Ike Ekeremadu, was to be honoured. Three other journalists involved in the crash however survived.