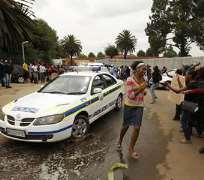 Eight South African policemen have been arrested on suspicion of murder after dragging a man tied to the back of a police truck through a busy Johannesburg street in an incident broadcast around the world, a government watchdog said on Friday.

The video-recorded treatment of the Mozambican taxi driver has further damaged the reputation of the police force in South Africa where more than 1,200 people a year die in police custody.

"They will answer to a charge of murder when they appear in court on Monday," Moses Dlamini, spokesman for the Independent Police Investigative Directorate (IPID), told Reuters.

Mido Macia, 27, was found dead in detention with signs of head injuries and internal bleeding, according to an initial post-mortem report released by the IPID police watchdog.

The video of Tuesday's incident shows Macia scuffling with police, who subdue him. He is then bound to the back of a pick-up truck by his arms before the vehicle drives off in front of scores of witnesses in the east Johannesburg area of Daveyton.

"We would like to assure the country and the world that what is in the video is not how the South African Police Service in a democratic South Africa goes about its work," Commissioner Riah Phiyega told a news conference.

Before the arrests, she said the eight officers had been suspended and the station commander would be removed from his duties.

President Jacob Zuma and opposition politicians have condemned the incident, which was broadcast nationwide on Thursday.

"The visuals of the incident are horrific, disturbing and unacceptable. No human being should be treated in that manner", Zuma said.

Police told media they had detained Macia after he parked illegally, creating a traffic jam, and then resisted arrest.

The incident is the latest in a series of scandals to hit South Africa's police force, already dogged by a reputation for brutality, corruption and incompetence.

The lead detective in the murder case against Olympic and Paralympic star Oscar Pistorius was removed from the investigation last week when it emerged he was facing seven attempted murder charges for allegedly opening fire on a minibus full of passengers.

Police shot dead 34 striking workers at a platinum mine in August last year - the deadliest security incident since apartheid ended in 1994.