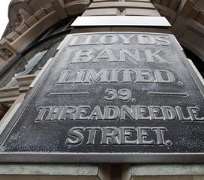 Britain's biggest retail bank Lloyds (LLOY.L) said it had set aside another 1.5 billion pounds ($2.3 billion) to compensate customers mis-sold loan insurance, the fifth time it has increased its provision.

Part-nationalized Lloyds now expects to pay out a total of 6.8 billion pounds to customers wrongly sold payment protection insurance (PPI), more than any other bank.

The policies were meant to protect customers in the event of sickness or redundancy, but were often sold to borrowers who did not want or need them. More than 14 billion pounds has now been set aside by UK banks to deal with the issue and industry sources have said the final bill could hit 25 billion pounds.

The increased PPI bill cast a cloud over full-year results which were better than expected. Lloyds made an underlying pretax profit of 2.6 billion pounds in 2012, up from 638 million a year earlier and ahead of the consensus forecast of 2.4 billion pounds, according to Thomson Reuters I/B/E/S data.

Shares in Lloyds were down 4 percent at 0850 GMT, leaving taxpayers sitting on a loss of around 5.8 billion pounds after Britain pumped in 20 billion pounds to rescue the bank during the 2008 financial crisis, leaving it with a 39 percent stake.

Chief Executive Antonio Horta-Osorio told reporters he was "very confident" that taxpayers would get their money back and Lloyds said on Friday it had linked Horta-Osorio's bonus to the shares reaching or being sold at a price at which taxpayers no longer make a loss.

"I came here with the main objective of getting taxpayers' money bank and, therefore, I thought it would be appropriate to make my bonus entirely conditional to us getting to the taxpayer entry price," he told reporters.

Lloyds has granted Horta-Osorio a 1.5 million pound bonus to be paid in shares and deferred until 2018. He will only receive the payout if the share price stays above 73.6 pence for a period of time or the government sells at least a third of its holding for more than 61 pence per share.

Lloyds is also one of more than a dozen banks still being investigated by regulators for their role in a global rate-rigging scandal but Finance Director George Culmer said it was not one of the banks at the centre of the probe.

"This isn't something we're just passive about," he added. "We do make proactive enquiries. It's not something that we get a lot of heat on."

Horta-Osorio said the bank was ahead of plan with its revival plan and expected a substantial reduction in impairments this year and a corresponding increase in underlying profit.

Provisions dragged the bank to a pretax loss of 570 million pounds for the year, compared with a loss of 3.5 billion in 2011.