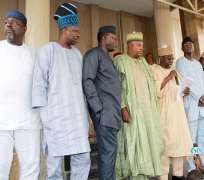 SAN FRANCISCO, March 01, (THEWILL) – All Progressives Congress (APC) governors have called for the strengthening of the umbrella body of all the governors in the country, Nigeria Governors’ Forum (NGF), saying the forum has played major roles in stabilising the polity in times of national crisis.

The call is coming in view of the current bid by the Peoples Democratic Party (PDP) to break the NGF through the recent formation of the PDP Governors’ Forum headed by Governor Godswill Akpabio of Akwa Ibom State.

But rising from its meeting in Maiduguri, the Borno State capital, Thursday, the APC governors declared that there cannot be any alternative to the NGF in view of its importance in national life since it was not formed on party lines.

However, the APC meeting came on a day Boko Haram rocked the town with multiple bombings, killing three soldiers and unspecified numbers of civilians in different parts of the town.

The blast which started at about 1pm at Bolori, a distance of about 15 kilometres from the Government House where the meeting of the governors was held was targeted at a patrol vehicle of the Joint Task Force (JTF). It soon spread to other parts of the town, including Custom area where three soldiers were said to have been killed by a mighty explosion which also claimed the lives of several civilians.

JTF spokesman, Lt. Col. Sagir Musa, while confirming the explosion which he said was targeted at the JTF patrol vehicle, said it left one civilian dead, while three others got injured, including a soldier .

On NGF, the governors working to transform the APC into a new coalition of parties for the opposition, said “rather than dis-uniting the unit, it should be strengthened for the good of the nation.”

They were also upbeat that more governors would join the APC train since "most of the leaders in PDP are members of APC but waiting for the right time" to join.

Lagos State governor, Mr. Babatunde Fashola, who spoke on behalf of the APC governors after the meeting, said NGF must be returned to its appropriate line, saying "it is a forum of governors across party line."

According to him, "We the progressives have resolved that anybody that mean well for the nation has to understand that we can only strengthen this forum, the institution of the Governors Forum."

Also speaking after the meeting, Governor Rochas Okorocha of Imo State said the door of the party is not locked on anyone yet as it is still in its formative stage.

" As you know, this is a big party coming up and Nigerians have not had it this good. Like all my colleagues have said, APC is a child of necessity simply because Nigerians are tired of PDP

"They want something new and I assure you that most of the leaders in PDP are members of APC waiting for the right time," he said.

On his part, Governor Ibikunle Amosun of Ogun State assured Nigerians that the APC will soon become a reality as they are only putting finishing touches to the arrangement.

"I don't want to agree with you that APC is no longer there, I believe we have a party it is just for us to meet all the conditions and the regulations by INEC and you will agree with me that this is the third time we are meeting and we are forging ahead. All the necessary qualities that are needed are in place, we have set up all the necessary committees and by the time we have our next meeting, the reports will be submitted.

"Everything will be put together and will now be concluded and Nigerians will be totally clear. All we want to do is that all of us come together in spite of our party leaning to form APC. We are resolute and determined and by the next time we meet, you will see that all grey areas have been resolved.

"We are forging ahead and have moved ahead with all the sundry matters, it is necessary we deal with these to make us have a very strong party," Amosun said.

Also speaking on the reason for bringing the meeting to Maiduguri, Governor Rauf Aregbesola of Osun State said it is to identify with the people of the state.

“What we met on ground was at variance with the picture the world was made to see. We see students in Borno going to school, men and women going about their normal duties.

“It is important to the people of Nigeria to have leaders that will dare to show to the whole world that we are united, strong and determined people in a nation that is forging ahead, that is what APC stands for rather than PDP that is bent on bringing us down."

Announcing a donation of N200 million to Borno and Yobe States, Aregbesola, who read read the communique of the meeting said they were in solidarity with both Borno and Yobe and are committed to the emergence of the new party.

He disclosed APC will soon embark on a national outreach and sensitisation campaign.