The Guardian Loses One Of Its Editors In Auto Crash 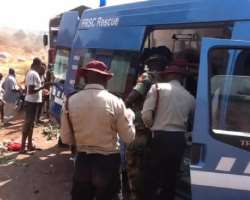 
The deceased, who was also the Senate Correspondent of the paper, was travelling from Abuja to Awka, the Anambra State capital alongside some other journalists to cover the convocation of the Nnamdi Azikiwe University where Deputy Senate President, Senator Ike Ekweremadu is scheduled to deliver a convocation lecture.


Witnesses say the crash occurred when the Toyota mini van they were travelling in lost a tire and summersaulted into the woods.


He is believed to have died at the scene of the crash while others sustained various degrees of wounds.

• Urges journalists to be prayerful and not be discouraged


Former Vice President Atiku Abubakar has condoled with the family of late Ogbodo and management and staff of the Guardian newspapers over the death of the journalist.


The former Vice-President in a condolence message issued Thursday by his Media Office said, “It is sad receiving the painful news of the death of John, an erudite, young and dedicated journalist who over the years had covered the National Assembly and the politics of our dear nation in a manner that I have personally come to admire his style of writing and the credibility of his reports.”


Atiku noted that “Being in the National Assembly for a long while now and working for the flagship of Nigeria media – The Guardian, tells a lot about the work ethics and the strength of character of this great journalist who died serving his country.”


Atiku prayed God “to accept the gentle soul of the departed; protect and console his family and grant them the fortitude to bear the irreparable and sudden loss.”


To the Guardian family and Journalists as a whole, the former Vice-President urged them to “take heart, be prayerful and not to be discouraged by the death of their colleague as only God the Creator knows everything and will help them overcome this painful loss.”


Atiku also condoled with the Senate, Senate President David Mark, Nigerian Union of Journalists in particular its Abuja Chapter and the Senate Correspondents Corps over the death of John who had dedicated a greater part of his journalism life interfacing with these institutions and officials.


He wished all the other Journalists who survived the crash and are receiving medical attention speedy recovery.