Oyerinde: Adoke Disowns SSS Report, Says Olaitigbe Is On His Own 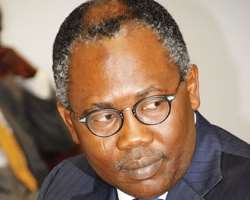 SAN FRANCISCO, February 28, (THEWILL) – The Federal Government, Thursday, declared that it had no hand in the investigations of the killing of the principal secretary to Governor Adams Oshiomhole of Edo State, Olaitan Oyerinde.

It maintained that the right to investigate the matter lies with the Edo State Government and the police rather than the State Security Services.

Declaring this was the Attorney General of the Federation and Minister for Justice, Mohammed Bello Adoke, SAN, who in a letter to the Chairman, House of Representatives, Committee on Public Petitions, said the comments attributed to him on the matter were misleading.

Adoke also disowned the statement credited to Mr. Thompson Olaitigbe, a Deputy Director, Public Prosecutions of the Federation to the effect that the ministry was confused on what to do with the conflicting investigation reports on Olaitan's murder.

He maintained that his ministry had considered the powers and duties of the State Security Services vis-a-vis the powers of the police and had come to a conclusion that it was the police that had the power to investigate murder and not the SSS.

"My attention has been drawn to the representations made by Mr. O.T. Olaitigbe, Deputy Director, Public Prosecutions of the Federation on behalf of my office and the Federal Ministry of Justice at the public hearing organised by your Committee on 27th February 2013 on the alleged complicity and improper investigation in the murder of Oyerinde Olaitan, an aide to the Edo State governor.


"It has been widely reported in the electronic and print media that Mr. Olaitigbe while making his presentation to the Committee, stated among other things that the Ministry of Justice was confused as a result of the investigation reports it had received from the Nigeria Police Force and the State Security Service (SSS) which appeared to have indicted different sets of suspects for the alleged murder of Oyerinde and that the Ministry could not proceed further with the prosecution of the suspects because of the need to harmonise the two reports .


"I wish to completely disassociate myself from the comments purportedly made on my behalf by Mr. Olaitigbe as the comments were at best, a figment of his imagination and very far from the truth.

"Mr. Olaitigbe was under firm instructions to inform the Committee that:the Federal Ministry of Justice had examined the powers of the State Security Service as provided by Section 3 of the National Security Act, Cap.N.74 LFN, 2004 and the powers of the Nigeria Police Force as provided by section 4 of the Police Act Cap. P.19 LFN, 2004 and had come to the reasoned conclusion that the power to investigate crimes of the nature under consideration (murder) resides with the Nigeria Police Force while the power to gather intelligence lies with the State Security Service, and


"(b) murder, the offence allegedly committed by the suspects is exclusively within the jurisdiction of the States in the Federation. The Criminal Procedure Act, Cap., C. 38 LFN, 2004 is very clear on this matter.

"The Federal Ministry of Justice therefore has no power to prosecute murder cases as murder is a state offence committed against State law and that the matter was already being handled by appropriate authorities in Edo State.


"In view of the foregoing clear instructions and position, I am shocked, embarrassed and utterly disappointed by the representations reportedly allegedly made on my behalf by Mr. Olatigbe. I have accordingly instituted an internal investigation to unravel the mystery and appropriate measures will be taken to discipline any officer found wanting in this deliberate propagation of falsehood.


"In the meantime, I wish to assure your esteemed members and the general public of the principled stance of my office on this matter as already elaborated above and to inform you that my office was never at any material time confused as to the steps to be taken in this matter.

"I sincerely regret the misrepresentation and the apprehension that it has generated in the minds of Honorable Members of the Committee, as well as the general public," Adoke said in the letter.