House Hit Back At EFCC, Probes Anti-Graft Agency Since Inception 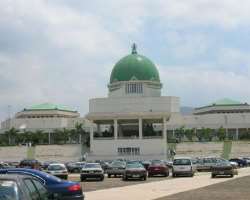 ABUJA, February 28, (THEWILL) – The House of Representatives, Thursday, hit back at the Economic and Financial Crimes Commission (EFCC) as it made a historic resolution by mandating its Committee on Drugs, Narcotics and Financial Crimes to investigate the whereabouts of all seized and sold assets by the anti-graft agency since its inception in 2004.

The decision by the House is the case of the hunter becoming the hunted as the EFCC is presently prosecuting many members of the House on various allegations of financial crimes.

The decision of the House was the fallout of a motion sponsored by Hon. Toby Okechukwu and 15 other lawmakers.

The sponsors of the motion alleged that EFCC had in the past confiscated over 200 mansions through 46 forfeiture court orders without any concise account of the state of the assets.

In his lead debate, the principal sponsor, Hon. Okechukwu argued that the EFCC had within its mandate at many times confiscated through court orders, assets from accused and convicted persons, including prominent Nigerians and corporate organisations.

The lawmaker noted that the Assets Forfeiture Unit of the anti graft agency was set up in 2008 with the mandate of ensuring that all assets forfeited to the Federal Government through EFCC were identified and verified.

The lawmaker expressed worry that there have been reports of vandalism, abandonment and wastage of some of these seized assets expressing dismay that there was lack of clarity as to the utilisation of these assets while litigations on the substantive corruption cases were on going in the courts.

He equally disclosed that there have been reported breach of the seal of the EFCC and attempts at unlawful and forceful repossession by those whose properties have been confiscated.

He maintained that the House has the responsibility to investigate reports of the wasting away of over 400 cars seized from some prominent Nigerians.

According to him, the right thing that should have been done was for these assets to be put under the management of professional managers who could have used them to generate revenue for the country.

The House however commended the EFCC for its diligence in the process of obtaining forfeiture order through the courts, but resolved that there was need for proper management of these assets..