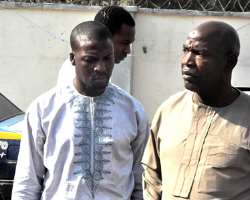 One of the charges read: “That you Adeshina Adelani Adekanmbi (a.k.a Akin Philips; Phillips Adeoba Akin), Alhaji Abdulahi Abdulkadir Mainasara (a.k.a Alhaji Abubakar, Alhaji Sanda; Gwantu Sani Liman), and Funmilayo Adebimpe Fakoya (Alhaja Zainab, Alhaja Ibadan ,Roseline Abdulahi, now at large) sometime in December, 2011 at Abuja Judicial Division of the High court of the Federal Capital Territory, with intent to defraud did agree among yourselves to commit an illegal act, to wit: obtain money by false pretence from one Uche Onovo, Managing Director and chief Executive Officer of Novos Chendu Limited and thereby committed an offence contrary to Sections 8(a) and 1(3) of Advance Fee Fraud and Other Related offences Act, 2006.”

The two accused persons pleaded not guilty to the charge when it was read to them.

EFCC Counsel, James Onu asked the court to fix a date for trial and remand the accused person in prison custody.

Attempt by the Defence Counsel, I. L Akharame to move for bail was opposed by counsel to EFCC.

Justice Goodluck adjourned the case to March 6, 2013 for trial and ruling on the bail application.