Seyi Law Not fit To Be Special Marshal- Fan Explodes 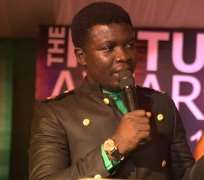 Seyi Law, the funny creature who came to limelight a few years ago has been listed alongside Iyanya, Oge Okoye, Halima Abubakar, Doris Simeon, Patience Ozokwor and others to be inducted Special Marshals by the Federal Road Safety Commission.

Today, FRSC released the first list of approved celebrities to be inducted as Celebrity Special Marshals on March 8th in Lagos but what a fan has just filed in is that, Seyi Law, out of the list, doesn't fit to receive such a honour reason being that he once had ripples with some Lagos State road authorities when his car was impounded.

“Such an ambassador shouldn't be lawless and should not have any record of criminality. And even a few days ago, he had another fisticuffs with some police men with his picture syndicated to all social media networks,” a follower of his career told us.