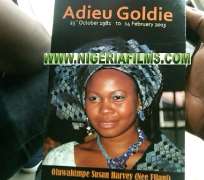 Friends, family and fans of the late song star, Susan Adebimpe Goldie Harvey will converge at Parkview Estate gate in Ikoyi and then proceed to walk through Osborne road through to Awolowo way, Barracks then back to Parkview for Candlelight procession in her memory.

MIC band will lead the procession while black, the regular dress code is the official cloth Goldie's Hubby, Andrew Harvey Opens Case On Prezzo 'He's Too Manipulating, She Despised Her And Distanced Herself'