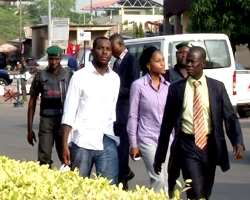 The couple who were arraigned on Tuesday 26 February, 2013 by the Economic and Financial Crimes Commission, EFCC were alleged to have falsely obtained the sum of N18 million from one Nike kolawole under the pretence that they will get her a four- bedroom house at Katampe Extension, Abuja; and another property at Caemly Estate, Idu Sabo, Federal Capital Territory, Abuja.

Counsel to the accused, Okechuku Ajunwa prayed the court to grant the first accused person bail since his alleged offence he is bail-able.

However, the prosecuting counsel, Samuel Ugwuegbulam opposed the bail application. He said though the offence for which the accused was charged is bail-able, it nonetheless carries a sentence of not less seven years which could be a motivation to jump bail.

“I urge this honourable court to fix a short date for trial so that the case will be heard and justice be served in the shortest possible time. EFCC has only three witnesses to present which can all be heard the same day.” He said.

The presiding judge having heard the arguments of counsel, granted the accused bail in the sum of N5million (five million naira) with two sureties in like sum.

He ordered that the sureties must be resident within the jurisdiction of the court and one of them must be a federal civil servant not below the rank of level 10.

Mustapha Audu’s wife, Zahra was on the day of her arraignment magnanimously allowed by the judge to enjoy the administrative bail granted her by the EFCC owing to her status as a nursing mother.