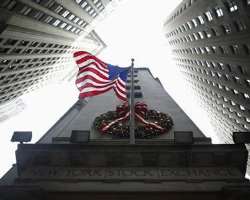 The U.S. economy barely grew in the fourth quarter although a slightly better performance in exports and fewer imports led the government to scratch an earlier estimate that showed an economic contraction.

Another report on Thursday showed a drop in new claims for unemployment benefits last week, adding to a string of data that suggests the economy improved early this year.

The growth rate was the slowest since the first quarter of 2011 and far from what is needed to fuel a faster drop in the unemployment rate.

Still, much of the weakness came from a slowdown in inventory accumulation and a sharp drop in military spending. These factors are expected to reverse in the first quarter.

Consumer spending was more robust by comparison, although it only expanded at a 2.1 percent annual rate.

Because household spending powers about 70 percent of national output, this still-lackluster pace of growth suggests underlying momentum in the economy was quite modest as it entered the first quarter, when significant fiscal tightening began.

However, data on retail sales and from the housing market has suggested a tax hike enacted in January did not deal a big blow to households. Incomes have grown for U.S. families who have also made inroads in reducing their debt burdens.

Some investors were disappointed by the fourth-quarter GDP reading, and U.S. stock index futures briefly turned negative after the data. Treasuries held onto early gains. The dollar edged lower against the euro and the yen.

"The fact that we only eked into positive growth in Q4 will do little to instill optimism in the pace of the recovery," said Omer Esiner, an analyst at Commonwealth Foreign Exchange.

Initially, the government had estimated the economy shrank at a 0.1 percent annual rate in the last three months of 2012. That had shocked economists.

Thursday's report showed the factors holding back the economy were mostly as initially estimated.

Inventories subtracted 1.55 percentage points from the GDP growth rate during the period, a little more of a drag than initially estimated. Defense spending plunged 22 percent, shaving 1.28 points off growth as in the previous estimate.

There were some relatively bright spots, however. Imports fell 4.5 percent during the period, which added to the overall growth rate because it was a larger drop than in the third quarter. Buying goods from foreigners bleeds money from the economy, subtracting from economic growth.

Also helping reverse the initial view of an economic contraction, exports did not fall as much during the period as the government had thought when it released its advance GDP estimate in January. Exports have been hampered by a recession in Europe, a cooling Chinese economy and storm-related port disruptions.

Excluding the volatile inventories component, GDP rose at a revised 1.7 percent rate, in line with expectations. These final sales of goods and services had been previously estimated to have increased at a 1.1 percent pace.

Business spending was revised to show more growth during the period than initially thought, adding about a percentage point to the growth rate.

Growth in home building was revised slightly higher to show a 17.5 percent annual rate. Residential construction is one of the brighter spots in the economy and is benefiting from the Federal Reserve's ultra-easy monetary policy stance, which has driven mortgage rates to record lows.

Initial claims for state unemployment benefits dropped 22,000 to a seasonally adjusted 344,000, the Labor Department said. The prior week's claims figure was revised to show 4,000 more applications received than previously reported.

Economists polled by Reuters had expected first-time applications to fall to 360,000.

A Labor Department analyst said no states were estimated.

While the level of jobless claims is near where it was in the early days of the 2007-09 recession, hiring has remained quite lackluster. Job gains have averaged 177,000 per month over the past six months.

High unemployment prompted the U.S. central bank last year to launch an open-ended bond buying program that it said it would keep up until it saw a substantial improvement in the outlook for the labor market.