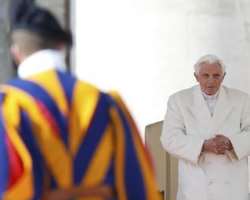 Pope Benedict, addressing cardinals on his final day in office, called on Thursday for the Roman Catholic Church to unite behind his successor and pledged his own "unconditional" obedience to the next pontiff.

"I will continue to be close to you in prayer, especially in the next few days...as you elect the new pope to whom I today declare my unconditional reverence and obedience," he said.

"In these past eight years we have lived with faith beautiful moments of radiant light in the path of the Church as well as moments when some clouds darkened the sky," he told cardinals gathered to bid him farewell, including most of those who will enter a conclave to choose his successor.

"We tried to serve Christ and his Church," he said.

Benedict's papacy was dogged by sex abuse scandals, leaks of his private papers and reports of infighting among his closest aides, crises that are thought to have contributed to his decision to be the first pontiff in six centuries to resign.

The pope spoke to the cardinals about nine hours before he officially steps down, leaving the papacy vacant until the new head of the Roman Catholic Church is chosen by the cardinals, a decision expected by the middle of March.