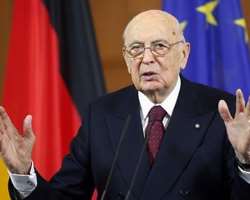 Italian President Giorgio Napolitano said on Thursday that the formation of a new government could not be rushed because of what he said were unfounded fears that Italy was a threat to the stability of Europe.

Napolitano told reporters during a visit to Berlin that the Italian constitution requires 20 days between elections - which were held on Sunday and Monday - and the new parliament sitting for the first time.

"I don't see right now how it could be accelerated. But it is important to say that Italy is not without a government, there is a government in office until the new one is sworn in," he said. "Italy is not a contagion risk for anyone."