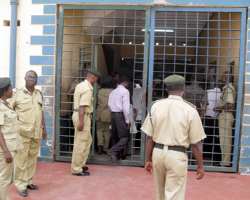 ABUJA, February 27, (THEWILL) – An amendment Bill that is geared towards decongesting prisons in Nigeria scaled the crucial second reading in the Senate on Wednesday.

Also the Senators disclosed that 70 per cent of persons locked up in Nigerian prisons are awaiting trial.

However, the bill seeks to compel the Comptroller-General of Prison to send monthly returns of the entire inmates of prison to the Chief Justice of Nigeria and the Chief Judge of the relevant states.

Going by provisions of the amendment Bill, the Chief Judicial Officer (state and federal) shall on the basis of the return, order the release of inmates who fall under the category of persons whose detention is manifestly unlawful or person detained and has been in custody, whether on remand or otherwise, for a period longer than the maximum period of imprisonment which the person detained could have served if he had been convicted of the offence in respect of which he was detained (Section 1 (a,b) of the principal Criminal Justice Act).

These were the high point of debates on the Bill for an Act to amend the Criminal Justice (Release from custody) (Special provisions) Act CAP C40 Laws of the Federation of Nigeria 2004 sponsored by Senator Babajide Omoworare (Osun/ACN).

Omoworare in his lead debate, told the Senators that the Bill if passed will finally lay to rest, the nagging national issue of prison congestion which, according to him, has defied almost every regime and attendant administrative policies in the country.

He said the cumulative effect of the extant Act and the proposed amendment to the Criminal Justice Act is that Chief Judicial Officers (state and federal) do not have seamless or limitless latitude to release persons awaiting trial at their whims and caprice.

"The disheartening bleak truth is that our prisons host almost 70 per cent of inmates who are awaiting trial. A worrisome fact conceded by Minister of Interior, Abba Moro, and globally echoed and lamented by Amnesty International. The agonising statistics which the Minister admitted recently revealed that 30,000 or over 65 per cent of over 46,000 inmates of prisons across the country are awaiting trial.

"This disturbing detention of persons is tantamount to an infringement of their fundamental rights as ordained in our constitution...the overpopulation of the prisons have largely been responsible for the incessant jail breaks in Nigeria and with this comes the attendant security risk to our nation as both convicted and awaiting trial inmates disappear into thin air," Omoworare stated at Wednesday's plenary.

Section 35 (4/5) of the 1999 Constitution (as amended) categorically provides that an accused must be brought before a court within a reasonable time or be released form custody two to three months from the date of arrest - a provision that has been largely unimplemented.

Senators in wide-ranging debates, all in support, called for far reaching prison reforms. Senate President, David Mark, stated, "Those mostly affected are not the high echelon of the society. They are the middle class and poor Nigerians. It is not fair."