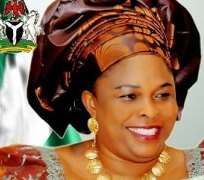 Speaking on Sunday through her spokesperson, Mr. Ayo Osinlu, Dame Jonathan maintained that the controversy generated by the project as well as the opposition of the project by the federal lawmakers were not in the best interest of the country.

Osinlu, who addressed State House correspondents in Abuja on the matter, said the controversial project should be allowed to take-off in order to further boost the external image of the country.

Explaining that the project was not the First Lady’s Non Governmental Organisation (NGO), Osinlu said it does not either fall within the schedules of her office , but that of the Federal Capital Territory Ministry which is appropriately handling the matter.

“It offends the original African culture of charity to obstruct any effort to promote peace and development such as the decision of all African First Ladies to rise up to the social responsibility as mothers and wives of leaders on the continent to save the women, children and the aged on the continent from the traumatic consequences of violent conflicts and wars.

“I can assure you, without any doubt , that it is far from the desire of the First Lady to have the project turned down. One, it will amount to an abdication of responsibility by Nigeria and that level of disappointment will be injurious for the leadership status of Nigeria in Africa. Certainly, the First Lady will not expect Nigeria to behave in such a manner.

“The First Lady would not also want the project abandoned because it is an undertaking that the country has made to the continent. It means therefore that the credibility of Nigeria will drop significantly if it goes back on its deliberate and willing commitment to host such an organ for the continent and at the request of the continent. Africa First Ladies Mission said give us a secretariat and you agreed that you will do it and then five years after, you wake up and say you don’t want to do it again. I don’t think that level of irresponsibility would be expected of Nigeria and the first lady won’t encourage that at all.

“Apart from the prestige that this peace mission building brings to the country, we could also see that there will also be social and economic advantages accruing to Nigeria from that. Look at the United Nations Building before it was attacked in Abuja. You can imagine the large number of young Nigerians that were engaged there as cleaners; security personnel and as maintenance workers around the structure. So, for this and many other reasons of course, it is the First Lady’s interest that the project should continue as proposed,” he stated.

Warning Nigerians to beware of the antics of the opposition, Osinlu said “What I want to do here is to sound a note of warning and to raise a public alert, to the effect that we must be very careful and very observant and not allow ourselves to be seen by certain persons as instruments to drive very private and very personal political objectives. If there are politicians and other persons in the society who desire to make gains out of this kind of unfounded confusion, we should be careful and not let them see and use us as instruments to drive such objectives.

“What I think here is that it is evident that there are certain persons out of view who are working very hard to bring dishonour to government, and to stain the name of the First Lady as a strategy towards the original objective of embarrassing government and advancing their interests with an eye on 2015. As you can see in recent times, they have used every matter, including the health and well being of the First Lady, to pursue this intent. This explains why everything is being fanned vigorously into an inferno and paraded as some kind of scandal, irrespective of what public interests are at stake,” Osinlu explained.