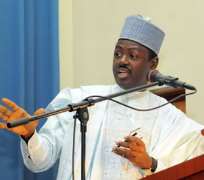 SAN FRANCISCO, February 22, (THEWILL) - Minister of Information, Mallam Labaran Maku, has stated that the Federal Government was doing its very best to prod the State Governments to justifiably utilise the 13 percent derivation fund in order for the oil-bearing communities to get justice.

The minister disclosed this while addressing the management of the Delta State Oil Producing Area Development Commission (DESOPADEC), on Friday during the Good Governance Tour to the establishment. He maintained that the states must ensure that oil revenue derivable from the oil producing communities are judiciously used to better the lot of such communities.

He said that it was wrong for states government to channel the money accruing to them through the host communities to develop city centres and urban areas of the states, leaving the oil communities to suffer the oil degradation with nothing to show.

The move is however seen as an answer to the agitation by oil bearing communities in the Niger Delta that the 13 percent oil derivation fund should be given to them directly to administer following alleged misuse of the fund by the State Governments.

It could be recalled that the Chairman of the Revenue Mobilisation Allocation and Fiscal Commission (RMAFC), Elias Mbam, had lamented that the monthly 13 per cent derivation fund from the Federation Account to oil producing states was being misapplied by the State governors.

The RMAFC boss had said that the Federal Government was concerned that the fund which ought to be exclusively spent on oil-producing communities that suffer most from the impact of environmental degradation occasioned by oil exploration, is unjustifiably spent in the development of state capitals and other urban centres to the detriment of the locals.

Maku, who commended Governor Emmanuel Uduaghan of Delta State, for releasing 50 percent of the 13 percent oil revenue to the agencies to administer, reiterated that states must plough back the resources derived from the host communities who bear the brunt of oil and gas exploration activities.

"That way the ecological constraints and environmental difficulties that they face as a result of oil pollution would be mitigated. Some of this communities have lost their farm lands and fish ponds as a result of oil spillage and other hazard coming from oil and gas production.

"So it is expected that at the level of state, we'll see justice going to these oil producing communities, we'll see resource goes to them and work for their future, we'll ensure investment in things that would reward them in the future," he said.

He however, commended DESOPADEC board for adopting the principle of continuity where existing projects are completed for the benefit of the people before awarding new ones, the Minister said that they would critically examined the record books provided by the oil commission to see if it has performed or failed.

Earlier, Executive Chairman of DESOPADEC Board, Mr. Oritsuwa Kpagho, said that the board which was repositioned by Governor Uduaghan in August 2010 had been working in consonance with the three-point agenda of the state government.

According to him, the board, though new, has completed 841 projects with 33 ongoing,saying it has not awarded new contracts so as to complete existing project however they are currently in the process of awarding new contract for the first time since the board was reconstituted.

"We mainly tow the path of the state government by intervening in roads, primary health care, bursary and scholarship for student. About 75 students are beneficiary so far. We have a number of graduands. We have the micro credit scheme also. We assisted in rural electricity by provision of transformers.

"DESOPADEC brought peace to the state because the oil producing areas were very restive prior to the establishment of the agency,” he stated.