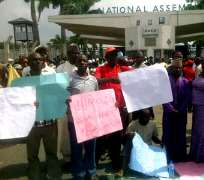 Their grouse also arose from the fact that their petition, which indicted the leadership of NIMC and was submitted to Chairman Senate Committee on Population and National Identity Card, Senator Maina Ma'aji Lawan, was allegedly covered up.

In the heat of the crisis, the NIMC Director General, Mr. Chris Onyemenam, had appeared before National Assembly late last year where he foreclosed possibility of recalling the sacked staff, describing them as unemployable. NIMC, according to impeccable sources, had followed this up with the flagging off of a mass recruitment exercise to replace the sacked workers.

But vowing to get justice at all cost, the sacked workers, THEWILL gathered, have also expressed their determination to disrupt the recruitment exercise, which commenced this week at regional levels.