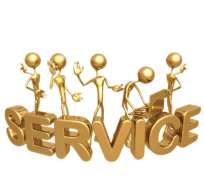 By Martins Oloja, Abuja
The end of the road came on Wednesday for those who had lobbied President Umaru Musa Yar'Adua to reverse his approval for fixed tenures for directors and permanent secretaries in the federal bureaucracy as the President has directed the Head of Service to fill immediately vacancies arising from the imminent retirement of the permanent secretaries.

Before the announcement of the new tenure for directors and permanent secretaries, five vacancies were declared from those that had retired and expected to retire. The five vacancies that had then been declared are for Lagos, Delta, Ogun, Bayelsa and the Federal Capital Territory (FCT) who are to begin the pilot scheme of compulsory computer literacy that has become mandatory in the new dispensation in the federal civil service.

The new policy thrust on examination for permanent secretaries was disclosed on August 14 through a circular Ref. No. HCSF/CMO/447/III/37/II/146 and signed for the Head of Service by the Permanent Secretary, Career Management Office (CMO), Ammuna Lawal Ali. It was exclusively reported by The Guardian.

Specifically, the President has approved for the guidelines for the replacement of the influential top civil servants who are to begin terminal leave for the policy that will begin in January next year.

The President had late last month approved "Tenure of Office for Permanent Secretaries and Directors" in the federal bureaucracy. In the circular dated August 26, 2009 conveying the new policy on tenure to all public servants, the Head of the Civil Service of the Federation had said the President's approved decision is part of continuing reforms in the federal civil service.

He had noted: "Government has found it necessary to develop a policy that will renew and reinvigorate the Service, restore morale of officers and unlock the creative potential of hardworking officers."

The new policy thrust has caused some furore in the service as some senior officers (especially of northern extraction) to be affected had protested, noting specifically that the new deal should not take a retroactive effect.

The Guardian that has consistently reported the issue exclusively had gathered that the few powerful permanent secretaries affected had also deployed their strength to their political leaders to prevail on the President to reverse the decision as, according to some of them, the North would be hugely depleted in the federal bureaucracy.

But the President, who was said to have implemented a similar decision in Katsina State as governor, has turned down all the powerful lobbies and approved immediate replacement of the vacancies to be created by the exit of the chief accounting officers of the ministries, departments and agencies (MDAs).

Consequently, following the President's approval, the Head of Service, Mr. Stephen Oronsaye, has issued a circular declaring vacancies in only five states where five permanent secretaries are to retire having served for more than eight years.

The affected states, according to a circular dated September 8 and released on September 9, 2009, are Bauchi, Borno, Kaduna, Sokoto and Zamfara.

The circular was signed by Dr B. N. Olorunfemi, a director in the Career Management Office in the office of the Head of Service.