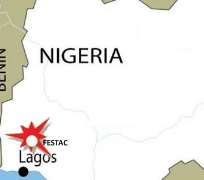 SAN FRANCISCO, February 18, (THEWILL) - A local sand dealer was killed Monday by an IED in what those who know him say was an assassination.

One witness told THEWILL that the IED was placed under a chair in his make shift office around Festac/Amuwo Odofin link bridge.

The explosion tore him to pieces, the eyewitness said.

Neighbours told THEWILL that rival groups have been battling to dominate the sharp sand business in the area, where the slain Pius Oladele made a fortune.