I had 9 surgeries in Germany - Patience Jonathan


First lady, Dame Patience Jonathan, Sunday, said she died and woke up during the period of  her ailment which necessitated her absence from the country for almost three months.

In a thanksgiving service at the state House chapel in Abuja, the first lady said prayers offered by  Nigerians sustained her while some people who had taken her for dead had began selling her properties.

According to her, she underwent seven surgery operations within one month and the doctors had given up hope on her survival.

She said: 'I remember when Chief  Obasanjo was the President of the country, I was close to his late wife, Stella. We worshiped together in this chapel.

'It was a painful moment for me that time when she died and her corpse was brought here.

'That was how my corpse would have been brought here. It was not an easy experience for me. I actually died, I passed out for more than a week. My intestine and tummy were opened. 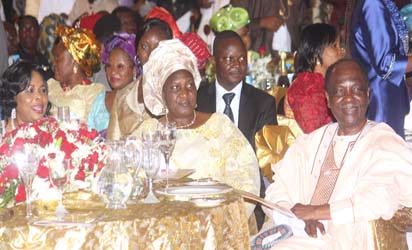 'I am not Lazarus but my experience was similar to his. My doctors said all hope was lost.

'A black doctor in London who is with us in this service was flown in when the situation became critical. It was God himself in His infinite mercy  that said I will return to Nigeria. God woke me up after seven days.

'I know that some people somehow leaked the information that  I was dead.  They are people that I trust and rely on; to them, I was dead and I would never return to the country alive. Some of them even sold my things off.

'I won't say everything here. It is the Lord's doing that I returned alive. When God says yes, nobody can say no.

'People are always afraid of operation (surgery) but in my own case, while my travail lasted, I was begging for it (surgery) after the third operation because I was going to the theatre everyday.

'It was God who saw me through. I did eight or nine operations within one month. It was not an easy one.