PORT HARCOURT - Pensioners in Rivers State, have resolved to embark on hunger strike to press home their demand for the payment of their pension arrears.

They also resolved to take the state government to court should their hunger strike fail to yield the desired result. 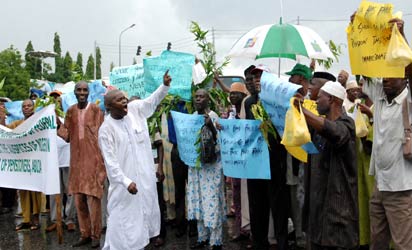 *File Photo: Cross section of pensioners defying the downpour during a peaceful protest against non-payment of their entitlements at the Federal Secretariat, Abuja. Photo by Abayomi Adeshida

The pensioners under the aegis of Nigerian Union of Pensioners, took the decision at the general meeting of Rivers State Council of the union to deliberate on the way forward, following alleged reluctance by the state government to pay them their retirement entitlements.

In the resolution,  Mr Edwards Abibo, Chairman, Rivers State Council of the union, said their arrears include primary school teachers' federal share 12 years after the responsibility to pay was transferred to states by the Federal Government and pension increments between 2003 and 2007.